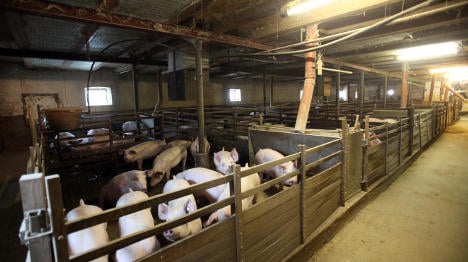 “The cost from the disruption in the market will be many times the direct damage,” said Gerd Sonnleitner, president of the German Farmers’ Association (DVB) on Saturday.

He said the price producers get for pork had dropped from between €1.40 to €1.50 a kilo down to €1.12 a kilo while the price farmers are paid for eggs has decreased by around 30 percent.

“All the proposed measures are necessary and go in the right direction. It is now about implementing them quickly,” he said, referring to Agriculture Minister Ilse Aigner’s ten-point action plan launched on Friday.

She said the discovery of toxic fatty acids in feed for pigs, egg-laying hens and other poultry required an overhaul of how food for animals at the nation’s farms was produced and distributed.

Aigner, who has already said she plans to tighten regulation of the animal feed industry, demanded new standards. She also reportedly wants the entire European Union to ban the production of fatty acids for animal feed at sites that also make inedible fats for industrial use.

“Perhaps Ms Aigner could have brought these measures to the public faster and more clearly,” said Sonnleitner.

He also called for a positive list of approved feed producers to be drawn up so farmers know where they can get reliable feed for their animals. Germany should not wait for the European Union to take measures, but should act alone and fast, he said.

DVB secretary general Helmut Born said the farmers would launch an image campaign soon to win back the trust of consumers with a message that German agriculture is environmentally sound and produces healthy food.

The business magazine Wirtschaftswoche reported this week that there were ten dioxin warnings in the European Union last year – found in feed ingredients from Canada, Dutch hens, Moroccan shrimp meal and Egyptian basil.