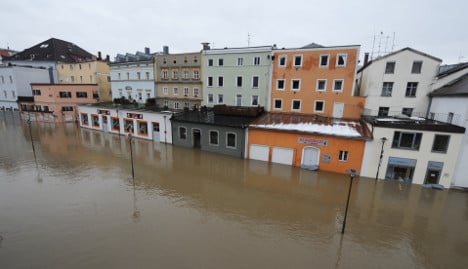 Authorities in the city of Passau in Bavaria were caught by surprise as the Danube River rose three meters within 24 hours. On Friday morning, the river reached 8.97 metres and some shipping traffic has been stopped. It’s the highest water level the city has seen since 2005, although below the record high of 10,81 metres reached in 2002.

Emergency workers and volunteers set out some 2,500 sandbags overnight, according to the city officials. The waters are expected to rise another half metre on Friday, which would likely leave Passau’s main square under water.

In northern Bavaria, the situation also remains critical, with officials expecting flood waters to be a problem until the middle of next week.

Drivers throughout the state have had to change their routes due to numerous flooded streets. One family had to be rescued by the fire department after their car got stuck on in the high water.

The swollen Elbe River in Saxony as well as the rising waters of the Elster still has officials there concerned. The city of Leipzig has been preparing for a flood wave for days and high waters are already threatening some northern districts of the city.

In Dresden, the waters have reached the edge of the historic city centre.

However, other regions in the country, such as Hesse and northern Baden-Württemberg, are seeing improvement. In the financial capital Frankfurt, floodwaters from the Main River have not breached the protective barriers and are beginning to recede.

The picturesque city of Heidelberg appears to have been spared the worst. Flood barriers erected around the city’s famous Old Town are to be removed.