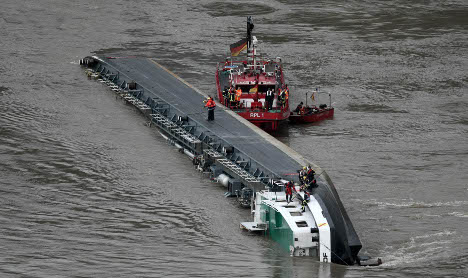 “Hope is fading by the hour,” said Uwe Gilberg-Rindfüßer, a Rhein-Lahn county official.

The search for the two men will continue as long as there is daylight, he added. So far, there has been no trace of them.

The 110-metre-long tanker, which was carrying 2,400 tonnes of acid, capsized on Thursday morning near the town of St. Goarshausen and the famous Loreley cliffs. The reasons for the accident are unknown.

Two cranes are on their way to the tanker, which is now on its side. There are concerns that an attempt to raise the tanker could cause it to break apart and spill its cargo. One option is to allow the acid to be released in small amounts into the river over months. Such an action would not harm the environment, according to officials.

“Traffic on this section of the river remains suspended due to the ship (accident) but also due to rising waters on the Rhine,” the deputy head of the regional Waterways and Shipping Office, Florian Krekel, told news agency AFP.