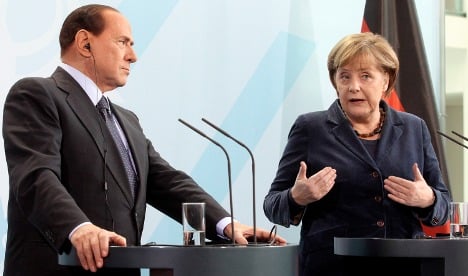 After holding talks with Italian Prime Minister Silvio Berlusconi in Berlin, Chancellor Angela Merkel said she was not prepared to discuss immediately increasing a European rescue fund, but was still prepared to defend the euro at all costs.

“Germany will do whatever is necessary,” she said.

But at a regular government briefing earlier on Wednesday, Merkel’s spokesman Steffen Seibert was more forthcoming about Berlin’s reluctance to pony up more cash for debt-stricken eurozone members right now.

“The German government finds at the moment that it makes no sense, and first and foremost that it is unnecessary, to talk about expanding the rescue mechanism,” Seibert told reporters. “This is not the time to announce to the world or to discuss publicly whether an expansion might be necessary some day.”

He said that just 10 percent of the €440-billion ($570-billion) European Financial Stability Facility (EFSF) had been used so far, bailing out Ireland in late 2010.

“It would be good if there were a period of calm in Europe, if we didn’t discuss on a daily basis all possible measures that might be needed in the future,” Seibert said.

The temporary fund was created last May to provide cover for countries in financial distress after Greece became the first eurozone country to be rescued from the threat of bankruptcy.

The European Union agreed last month to create the permanent crisis mechanism to replace the EFSF when it expires in 2013.

The temporary fund totals €750 billion when contributions from the entire EU and the International Monetary Fund are added. As Europe’s biggest economy, Germany is the biggest contributor, and Chancellor Angela Merkel is wary of alienating voters ahead of seven state elections this year after unease about rescues of Greece and Ireland in 2010.

But analysts have repeatedly warned that the rescue fund needs to be bigger in order to calm nervous markets concerned that the debt crisis could spread to Portugal and even bigger economies like Spain, Belgium and Italy.

European economic affairs commissioner Olli Rehn said talks were underway with European Union member states on the possibility of increasing the EFSF and its successor, the European Stability Mechanism.

“We must ensure that the financial support mechanisms that were put in place last May are fit for the purpose,” Rehn said at a conference on economic governance.

European Commission president Jose Manuel Barroso urged European leaders on Wednesday to give the fund more muscle by their next summit in February.