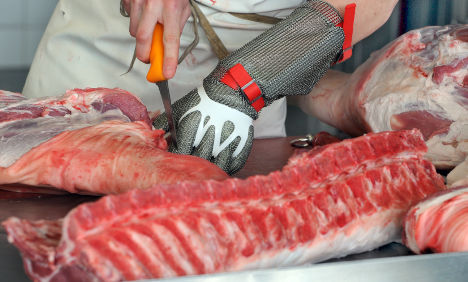 “This is a scandal that is growing bigger and worsening every day,” Johannes Remmel, agriculture minister in the western state of North Rhine-Westphalia, told the Frankfurter Allgemeine Zeitung (FAZ) daily.

China announced the ban, effective immediately, a day after authorities ordered the slaughter of 140 pigs at a German farm following the discovery of dangerous dioxin levels in pork for the first time since the scandal broke last week.

It banned imports of “German-produced edible pork and egg products,” the country’s product safety watchdog said in a statement, saying the move was aimed at safeguarding the health of Chinese consumers.

Chinese authorities also said they would inspect goods shipped from Germany prior to Tuesday and would release them only if they were found to be safe. Germany exported 7,000 tonnes of pork to China in 2009, the German government said, worth some €6 million ($8 million).

Previously only South Korea had banned German pork imports, while Slovakia had halted sales of German eggs and poultry meat, despite Berlin’s repeated assurances there was no immediate risk to human health.

The scare began last week when it emerged that a German firm may have supplied some 3,000 tonnes of fatty acids only meant for industrial uses to makers of animal feed late last year. The feed was then widely distributed.

There are also indications that the firm, Harles & Jentzsch, has been selling the contaminated fatty acids since last March, a Schleswig-Holstein Agriculture Ministry spokesman told Wednesday’s Westfalen-Blatt daily.

The company, which is under criminal investigation, filed for insolvency

Wednesday, a spokeswoman for the regional court in the western town of Itzehoe

With eggs found to have high levels of dioxin, which can cause cancer in high doses, authorities destroyed 100,000 eggs last week and banned almost 5,000 poultry and pigs farms from selling produce while tests were conducted.

Most of these farms have been since been given the all-clear, with just 412 still subject to the lockdown as of late Tuesday, according to the agriculture ministry in Berlin. Only three chickens were confirmed to be contaminated.

But on Tuesday authorities said that pork with high levels of dioxin had been discovered at a farm in the state of Lower Saxony, and that pork originating from animals slaughtered prior to the farm being banned from selling may be in shops.

The Neue Osnabrücker Zeitung daily reported that around 100 pigs from the farm had been slaughtered in late December, with the animals killed at several different locations.

The Die Welt daily reported that the farmer concerned has his own feed-making facilities and that he had mixed in as much as 10 times the recommended amount of the suspect fatty acids, as well as supplying other farms.

The FAZ also reported that although quite a few farms are seeing their restrictions lifted, increasing numbers are being closed, including 95 in North Rhine-Westphalia on Monday alone.

The German government said previously that none of the up to 150,000 tonnes of suspect animal feed had been exported, but the European Commission said this week that some had in fact made it to Denmark and France.

Around 136,000 eggs meanwhile were exported to the Netherlands, some of which ended up in Britain.

Public trust within Germany has also been shaken, causing sales of organic eggs, unaffected by the scare, to soar according to experts and shopkeepers. Anecdotal evidence suggests that sales of organic meat are also on the rise.

The scare has put German Agriculture Minister Ilse Aigner under pressure, with Renate Künast from the opposition Greens, herself a former agriculture minister, called for her departure.

“Consumer protection in Germany needs a new start – and that can’t happen with Ilse Aigner,” Künast said. “She is incapable, she is unwilling.”

But Aigner on Wednesday defended herself, saying that she was working on an “action plan” to be discussed with agriculture ministers from Germany’s 16 states next week before briefing EU officials in Brussels on January 24.

“This dioxin case will not be without consequences,” she told reporters.