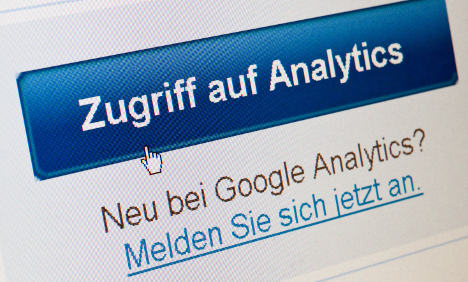 “Unfortunately we have come to the conclusion that Google has not complied with our data protection demands,” Johannes Caspar, commissioner for data protection in Hamburg where Google Germany is based, told daily Frankfurter Allgemeine Zeitung Tuesday.

“We must clearly say: What Google offers is not enough.”

The free internet service Google Analytics gathers detailed information about website visits via a user’s IP address, sending the data back to Google servers in the United States for processing.

According to the paper, Caspar and data protection officials in other German states believe this practice should be illegal.

Caspar has been in talks with Google over the issue since November 2009, with the company agreeing to abbreviate IP addresses for anonymity, in addition to creating user protection modules for different internet browsers.

But Caspar told the FAZ that for some browsers, namely Safari and Opera, there is no such solution.

“Through this some 10 percent of German internet users are left out of the opt-out option,” he told the paper.

Caspar also alleged that Google still collects the full IP addresses of users who declare their wish for anonymity.

“Those who opt out end up in a worse position than those who don’t,” he said.

But Google Germany’s data protection official Per Meyerdierks told the paper that he was not aware talks with the country’s officials had been cut off.

Google Analytics has met European Union privacy standards since its first version and has met the demands of German customers, he said, adding that businesses who use the service also have the option to shorten their users’ IP addresses for anonymity.

But according to Caspar, Google is “playing for time” and sees no necessity to adhere to legal standards in Germany.

“For this reason they are using the circumstance that legal responsibility for the use of Google Analytics lies not with Google, but with website operators. Google is hiding behind their backs,” he said.

Caspar and the collective of state-level data protection officials, known as the Düsseldorfer Kreis, plan to find a way to act against companies that continue to use Google Analytics, he said.

Those that defy the rule could face a “steep fine,” he said.

Meanwhile a test legal case against a large company using the service is also in the works, he said.

The issue puts Google in the crosshairs of German data protection advocates once again following the launch of their controversial service Google Street View in November last year.

The program, which provides online panoramic images of streets, public spaces and tourist attractions, sparked heated debate and led some 250,000 users to have their homes and businesses digitally obscured.