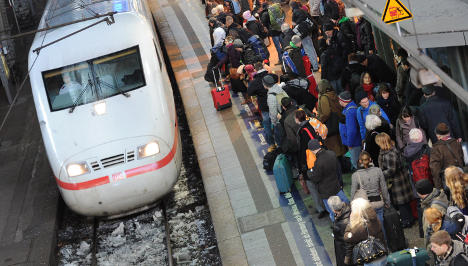 Grube prompted derisive laughter from Berlin state legislators when he claimed that DB’s S-Bahn commuter train service in the capital had been well-prepared for the winter.

Deutsche Bahn’s catalogue of problems with the S-Bahn is to cost the rail operator €700 million over the next four years – just one in a string of issues that boss Rüdiger Grube had to explain on Monday.

As well as fronting the Berlin parliament’s transport committee, Grube also faced a grilling from state transport ministers from around the country over Deutsche Bahn’s mediocre performance during recent severe winter weather. In December, high-speed intercity trains were plagued by cancellations and delays, while some areas are still struggling to reach full regional train service.

Grube promised €44 billion in investment on upgrades over the next five years – though some state transport ministers insisted that would not be enough and Grube admitted he could not guarantee services would be back to normal next winter.

But the centre-right federal government, backed by conservative state ministers, refused to waive the €500 million it is owed by Deutsche Bahn as a dividend on profits.

Facing the Berlin parliament’s transport committee, Grube admitted the operator would not turn a profit on the troubled city network in the capital until 2017.

For the years 2009 and 2010, Deutsche Bahn had racked up “crisis costs” of €370 million. A fresh compensation round for customers would be offered though not until at least the end of January, as Deutsche Bahn still needed the agreement of the BVG company, which operates Berlin’s U-Bahn metro, tram and most bus services.

He apologised to Berlin S-Bahn customers for the “continuing exceptional circumstances.”

The combination of the toughest winter in 41 years with technical problems had caused “extreme strain” on the system, he said. Under the circumstances, Deutsche Bahn had been been so well prepared for a winter as this one, he said.

The remark was met with laughter from members of the committee.

The S-Bahn service in Berlin has offered only a limited service since summer 2009. For the past two winters, the system has been plagued by frequent cancellations and delays.

Grube also sought to deflect criticism by blaming suppliers of components for Deutsche Bahn’s rolling stock. The chaos had actually been sparked by defective components on the S-Bahn 481 series, which is the most commonly used, he said.

He added that he was upset that such issues – which were beyond Deutsche Bahn’s control – had been commonly overlooked in the debate about the S-Bahn.

The situation had been made more difficult still by additionally tough conditions imposed by the Federal Railway Authority. In particular, monitoring of the machines to spread grit for the S-Bahn had cost a lot of time.

State transport ministers urged the federal government to use Deutsche Bahn profits to improve rail services. However, there was no majority among them to directly pressure the government to waive its €500 million dividend.

It was understood the ministers had applied tough pressure to Gruber in the closed meeting.

“We expect that such issues will be remedied,” said Brandenburg Infrastructure Minister Jörg Vogelsänger afterwards.

Gruber asked for understanding. Circumstances beyond the operator’s control such as black ice and problems with power supply had all arrived at once. He vowed the operator would invest €44 billion in upgrades over the next five years.

Saxony Transport Minister Sven Morlok said there needed to be €50 billion in new investment. Federal transport state secretary Klaus-Dieter Scheurle said there had been an investment backlog and it would cost more than €44 billion to remedy the situation.