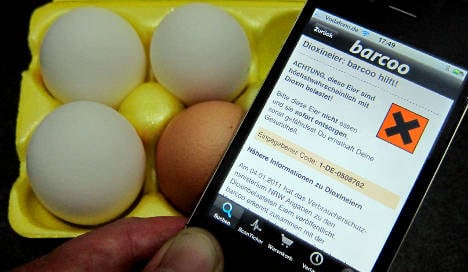 Barcoo, a company that sells software to scan barcodes with smartphone apps comparing prices of similar products, has moved quickly to offer its customers the ability to test eggs for potential contamination.

“You type in the unique number that is found on each egg and then you get an answer whether there is dioxin inside or not,” Martin Scherer, the firm’s business development manager, told news agency AFP.

Authorities have published a list of serial numbers of products from suspect farms and also numbers from facilities known to be safe, Scherer explained. “So we have a positive list and a negative list.”

The software application also informs consumers whether the egg they are considering is organic, in which case dioxin is not a risk.

Scanning the barcode on a box of eggs does not work because a box can contain eggs from different sources, he said.

According to a survey of around 500 people in Sunday’s Bild am Sonntag, one in five Germans are steering clear of eggs in the wake of the crisis that has shaken public faith in food safety. More than 100,000 eggs have been destroyed due to the scandal.

Scherer said that people appeared to be seizing the opportunity to download the free dioxin-checking application. “Our usage is four to five times higher than normal,” he said.