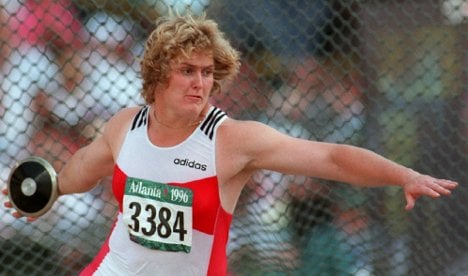 The 1996 gold medal winner had the operation in early December, according to a report in Saturday’s Bild newspaper.

“I had the choice of losing my leg or losing my life. But I wanted to live,” she told the paper.

“This thing is very regrettable due to her long suffering. But with her strong will, she will be in the situation to master this situation too,” said her former trainer Gerhard Böttcher, who helped her to victory in the Atlanta Games.

“She took the right decision after a long time of consideration,” he said.

Wyludda studied medicine after finishing her athletic career, and received her license to practice medicine this January, despite having been plagued with pain in her leg.

She had undergone several operations on her knee and lower leg last year. It was after one of these that complications arose, with one wound becoming infected.

“This septicaemia could have been fatal,” said Wyludda. “50 percent of all those with such an infection do not survive it.”

She said she was ready to make the necessary changes in her life to adapt to the missing leg, and then intended to continue work as a doctor, specialising in pain therapy.

“Of course there will be changes; the flat and car will have to be altered. But life is like that now,” she said.