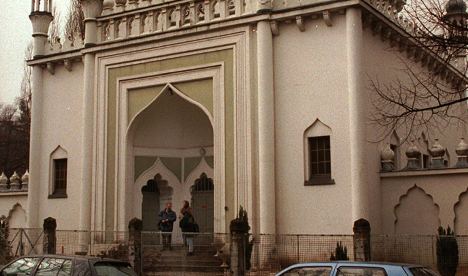 The entrance to the Ahmadiyya mosque. Photo: DPA

Detectives said on Saturday there was a message left at the site of the attack at the Ahmadiyya community in the Wilmersdorf district of Berlin, but did not reveal what it said.

Someone had set the entrance to the mosque on fire, but the passer-by noticed the flames at around 1:45 am on Saturday, and started putting out the blaze himself. When police officers arrived, they finished off the job with a fire extinguisher from their vehicle.

Criminal detectives are now on the case, trying to determine whether there is a link between this attack and arson attacks on other mosques during 2010.

The last six months of last year saw six such attacks – the Shitlik mosque on Columbiadamm was attacked in June, twice in August and again in November, while the Neukölln Al-Nur mosque was attacked in November and an Islamic cultural centre in Tempelhof was targeted in December.

No-one was hurt in any of the attacks, but damage was done in every case.