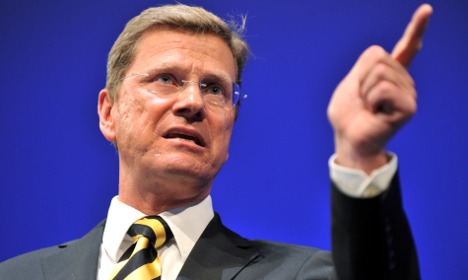 Hoping to master his political fate amid a growing chorus of internal criticism, Westerwelle told his fellow Free Democrats gathered in Stuttgart that he would go on the offensive to revive the FDP’s fortunes.

“We must fight – because Germany cannot be abandoned to the left,” he said. “Whoever wants govern must be able to withstand setbacks. You cannot defend freedom by discarding it.”

Westerwelle, who is also vice chancellor in Germany’s ruling centre-right coalition, has come under increasing pressure in recent weeks to show he is the man to lead the free-market FDP out of its funk.

Junior partner to Chancellor Angela Merkel’s conservative Christian Democrats, the FDP has unimpressed Germans during its time in office over the past year. Appearing beholden to special interests and led by the unpopular Westerwelle, the party has plumbed record lows in opinion polls heading into a year full of important state elections.

This has led to growing calls from within the FDP for Westerwelle to step aside as party chairman. However, he showed no sign he was prepared to abandon the leadership on Thursday.

The coming months – chockfull with key elections – will show if Westerwelle’s speech at the party conference in Stuttgart was a turning point or the beginning of the end of his leadership.

But Westerwelle appeared convinced on Thursday Germans would soon back the party again.

“Whoever loves freedom needs the FDP,” he said.

“We’ve always emerged from such challenges stronger when we stuck to our principle,” he said.

But he also said Merkel’s conservatives were partly to blame for the public’s poor view of the government.

“If one doesn’t prod the Union, they do nothing, and that is the mandate of the FDP in the coalition,” he said, referring to Merkel’s Christian Democratic Union and their Bavarian allies.