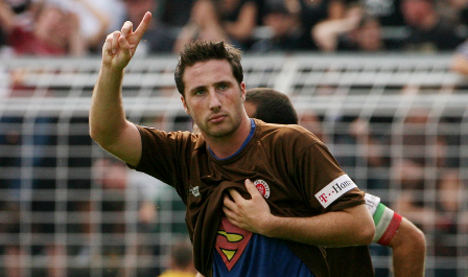 The weekly magazine Stern cited Rene Schnitzler as saying in an interview that he had received the cash to manipulate five away matches during the 2007-2008 and 2008-2009 seasons when the Hamburg outfit were still in the second division.

He said an agent named “Paul” handed him the money to fix the games, but denied actually doing so.

According to Stern, “Paul” is a Dutch man called Paul Rooij. The magazine

in Asia on suspected fixed matches.

Rooij is also thought to have links to several of the alleged ringleaders on trial in Germany accused of fixing more than 30 matches across Europe in what is believed to be European football’s biggest fraud scandal.

Schnitzler added that he was addicted to gambling. “Since the age of 18, there has scarcely been a day I have not gambled,” he told the magazine’s latest edition.

St. Pauli came ninth in the second division in the 2007-2008 season when one of the games in question took place. The four other games took place in the following season when the club came eighth.

They won promotion to the top flight last season, coming second in the league. They are currently 15th in the Bundesliga, just above the drop zone.

St Pauli won one of the five matches in question, drew one and lost three. Schnitzler played the full 90 minutes in only one match, was a non-playing substitute in two and came off the bench for 15 minutes in another. In one of the suspect matches, he did not play at all.

A spokesman for the club, Christian Bönig, said he was “shocked, but not totally surprised” by the revelations.

The club was aware the player had difficulties, had tried to help him but “he would not let himself be helped,” Bönig told rolling news channel N24.