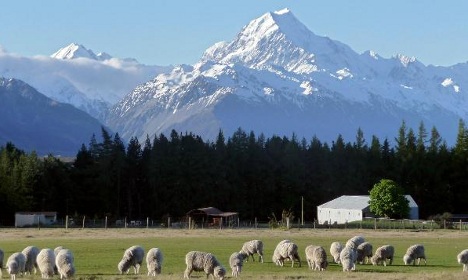 The Timaru Herald newspaper reported that Jurgen Karl Ahrens, 72, a keen hiker, climber and kayaker, had been on the run from New Zealand immigration officials for over two decades.

He was arrested last week after his distinctive Mercedes car, which police had been looking for, was reported by other hikers at Aoraki/Mt Cook National Park on New Zealand’s South Island.

Ahrens was wanted in connection with an assault at Fox Glacier in 2004. Joe Rush, a police constable who dealt with Ahrens in the nearby town of Twizel, said the long-haired, bearded and unkempt German was relaxed and pleasant.

“If you saw him, you would think, ‘He’s a bit of a rough bugger,’” Rush told the paper. “He just constantly talked. He speaks English well, he was very polite and was quite easy to talk to.”

Ahrens’ story remains something of a mystery. He claimed he had come to New Zealand from Australia, where he had worked for 20 years. But his passport showed rather that he had come from the Philippines.

“He didn’t really say why he came here,” Rush said. “He claimed he had some investments in the North Island.”

Ahrens had also refused to comment on the assault charge. He said he lived in a flat in Christchurch that was rented from a friend. He had a New Zealand driver’s licence and appeared to be living off a German pension.

Although Ahrens had never had a speeding or parking ticket, police were on the lookout for his car because of his visa overstay. He was to be deported Monday, the Timaru Herald reported. He told police there would be no friends or family waiting for him in Germany.

Nevertheless, he seemed sanguine about the whole episode, tell Rush: “This is an interesting part of my life.”