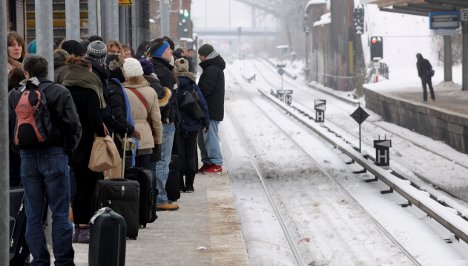 Since the onset of wintry weather last month, more than 1,000 of the S-Bahn’s trains have broken down.

With the S-Bahn running infrequently or not at all on some lines, commuters have been forced to switch to buses and the U-Bahn metro where they can.

The latest S-Bahn setback is another chapter in a long saga of mismanagement and shoddy upkeep of part of the German capital’s once proud public transportation network. Operated by national railway provider Deutsche Bahn, the S-Bahn is distinct from the BVG, the company running the city’s metro, buses and trams.

But with an extra 400,000 passengers cramming alternative means of transportation each day, there a few illusions among city transport officials.

Berlin Transportation Minister Ingeborg Junge-Reyer has demanded Deutsche Bahn present solutions to the S-Bahn crisis by this Wednesday. However, the city still rejects ending the company’s contract to operate the S-Bahn before it ends in 2017.

“They know what they have to do,” Junge-Reyer’s spokesman Mathias Gille told Der Tagesspiegel. “We’d have to buy (Deutsche) Bahn’s services right back for lack of an alternative.”

Adding insult to injury to Berlin’s commuters, fares for public transport in the city were hiked by 10 percent at the start of the year.