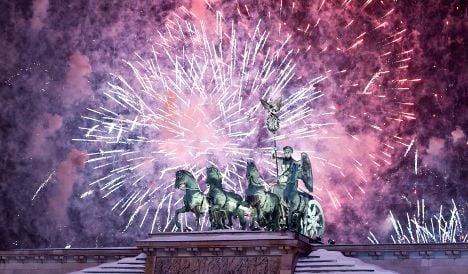 Through 2010, the European debt crisis simmered away in the background and came to dominate the news in Germany in the final months of the year. This year will pick up where the last left off.

Chancellor Angela Merkel made clear in her New Year’s address that the euro would be her immediate priority, describing it as “much more than a currency.” But Merkel will also have one eye on the looming state elections, which could see voters desert the parties forming her unpopular centre-right coalition.

The Eurovision Song Contest and the FIFA Women’s World Cup, meanwhile, should provide some welcome distractions from the debate over the future of European unity.

Here are some of the key issues looming as we begin the new year.

The euro: Germany was the most prominent player in the 2010 debate, though not always the best-loved. The signs are Merkel will continue to stand firm, insisting she is committed to Europe’s single currency but refusing to offer blank cheques to cash-strapped eurozone members.

Germany wants such countries to be forced to adopt strict cost-cutting regimens if they ask for help from any future bailout fund. Also, bond investors would be given “haircuts,” meaning they would bear some of the loss if a country can’t pay its debts, rather than leaving taxpayers to pick up the tab.

European leaders have agreed to try and sort out the details at a meeting in Brussels in March.

A key question is whether Merkel will show any flexibility on issues such as collective “eurobonds,” which would help neighbours struggling with high debt but cost Germany up to €17 billion a year in extra interest on its borrowing, according to calculations by the Frankfurter Allegemeine Zeitung.

How will Merkel balance the need to keep the euro – in which Germany has invested so much political and economic capital, and from which it has benefited financially – afloat against many Germans’ reluctance to pay for the fiscal laxity of their neighbours?

Elections: Looming large in Merkel’s mind as she tackles the euro debate will be seven key state elections taking place in 2011.

The big one to watch will be Baden-Württemberg on March 27. Premier Stefan Mappus faces a strong backlash because of opposition to the Stuttgart 21 rail project and the forceful police reaction to demonstrations that included the use of water cannon and tear gas.

Merkel’s Christian Democratic Union has held the state since 1953 but polls suggest the centre-left Social Democratic Party (SPD) and Greens are in striking distance of seizing power in a coalition. A bad result would seriously weaken the authority of the chancellor and, at the very least, sink her chances of running for a third term in 2013.

Also on the ropes is Free Democratic Party leader and Vice Chancellor Guido Westerwelle. Already under intense pressure over his poor performance in the past year, Westerwelle would suffer a death blow if his party were wiped out in state elections.

The other big poll is in the capital Berlin. There, high-profile Green Renate Künast is to challenge the incumbent mayor, Klaus Wowereit of the SPD. Victory would make Künast, a former federal minister, the first Green state premier.

Afghanistan: Will Germany begin to withdraw its troops and hand over responsibility to Afghan forces this year? Westerwelle thinks so; he has repeatedly said he expects the Bundeswehr to start drawing down this year.

But Defence Minister Karl-Theodor zu Guttenberg has openly contradicted Westerwelle, saying he doesn’t want to set deadlines independent of the situation on the ground – setting the scene for a showdown this year.

Eurovision: Lena Meyer-Landrut will defend her Eurovision Song Contest title in Düsseldorf on May 14. It’s only the third time a winner has competed again the following year and the first time since the 1950s.

With no need to choose a contestant, a reality TV programme will instead choose which song Lena will perform. Not surprisingly, her Svengali, Stefan Raab, is the head of the judging panel.

Women’s football: Germany will host the FIFA Women’s World Cup 2011, kicking off June 26 when the home team – who are also defending champions – meet Canada in Berlin.

Joining them in Group A are France and Nigeria. The USA is the top-ranked team going into the cup, followed by Germany and Brazil.

The Pope’s visit: Pope Benedict XVI will make his first official state visit to his home country on September 22 and 23.

He will address the Bundestag in Berlin and visit Freiburg in the south and Erfurt in the east. The visit is likely to spark a mix of pride and controversy in a country that is 30 percent Catholic but which has been rocked by sex abuse scandals over the past year, leading to a reported exodus of church members.

Economy: Recent predictions from Germany’s various economic gurus forecast economic growth this year of at least 2 percent – a slowdown on the 2010 boom but still a healthy figure.

The Kiel Institute, for instance, predicts growth of 2.3 percent, while the German Council of Economic Experts – the so-called “wise men” – expects 2.2 percent growth.

Economists also expect unemployment will continue to fall. The Federal Employment Agency predicts the number of people looking for work will average 2.96 million through 2011, down from an average 3.24 million last year. More people than ever before will be working.

But pressure will grow for wage increases. After years of accepting wage restraint, workers and unions have been signalling they want to enjoy a greater share of the spoils of Germany’s economy rebound.

Bundesbank president Axel Weber, meanwhile, is regarded as a frontrunner – along with Italian central bank chief Mario Draghi – to succeed Frenchman Jean-Claude Trichet as president of the European Central Bank.

The hawkish Weber has been his own man as an ECB board member, opposing for instance the ECB’s government bond purchases. His accession would consolidate Germany’s firm stance on the debt crisis, as he has generally been tougher on indebted peripheral eurozone countries than other ECB board members.