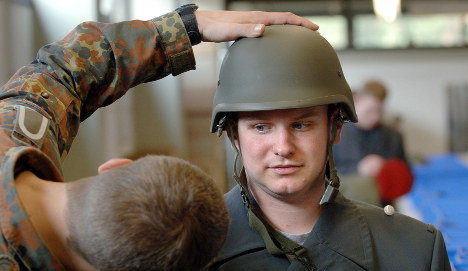 As of March 1, the Bundeswehr will accept only volunteers into its ranks and military service will be phased out entirely by July 1. Conscription will remain allowed by the German constitution, however.

The 12,000 men showing up for their six-month stint on Monday will be the last to take part in Germany’s once-obligatory military service, which was first instituted in West Germany in 1957. The decision to end the Wehrdienst, as conscription is known in Germany, is part of a wider reform of the country’s armed forces.

Defence Minister Karl-Theodor zu Guttenberg has agreed to reduce the Bundeswehr from its current size of 240,000 soldiers to an all-professional force of around 170,000. The ministry expects 7,000 to 15,000 volunteers each year, compared with the military’s present 28,500 conscripts.

Hellmut Königshaus, parliament’s liaison to the military, on Monday expressed understanding for the nation’s last batch of grudging conscripts forced to report against their will.

“I can’t sympathize with those seeing this draft as unjust, because military service will affect only a very small group of young men this year,” he told regional daily Hannoversche Allgemeine Zeitung.

Accordingly, he called on military officials to show flexibility and consideration for those men that would be exposed to particular hardship because of their service.

“For example, if someone has to put off their university studies for an entire year because of military service, the Bundeswehr should attempt to avoid this,” he said. “The army should be generous in this regard, as it has been in the past.”

Königshaus also warned the German armed forces must become a more attractive employer in order to draw talent in a post-conscription world. “More has to be done in order to compete for skilled specialists,” he said.

Showing how the military needed to become more accommodating, he pointed out that a disproportionately high number of German soldiers commuted each weekend to where their families lived.