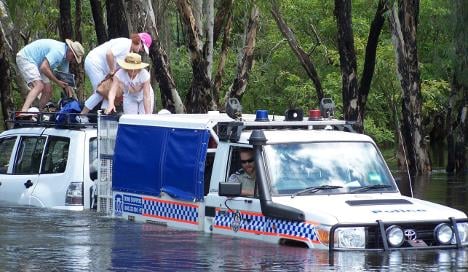 The German group were stranded in Kakadu National Park, to the west of flood-ravaged Queensland, where residents are battling rising waters described by one official as “biblical.”

Kakadu, an area made famous by the film ”Crocodile Dundee,” has also experienced heavy rainfall and police said the Germans were lucky their car was not washed away. The group – two men and two women – ignored warning signs and tried to cross Magela Creek on the Oenpelli Road in Australia’s far-north Arnhem Land on Monday.

The river crossing, which is about 100 metres wide, was under about a metre of water.

Northern Territory police superintendent Debbie Smith told broadcaster ABC that the group tried to drive across at 80 kilometres per hour. But the engine stopped halfway across. They were rescued about half an hour later.

“Some witnesses nearby had warned them not to enter the water because they are croc-infested and the people have climbed onto the roof of their vehicle awaiting rescue,” a clearly unimpressed Superintendent Smith said.

“Fortunately nobody was injured, but it certainly put everybody’s lives in a bit of danger in that regard – and unnecessarily – and as well caused quite a bit of water damage to the inside of the police vehicle.”

At least three people have died in the worst flooding in decades in the large, northeastern state of Queensland in recent days. The floods have affected an area the size of Germany and France combined.