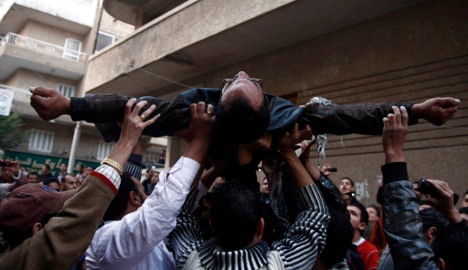 Bishop Anba Damian, head of the Coptic Church in Germany, told Bild am Sonntag newspaper that he had asked the government for special protection out of fear his church’s followers would be targeted.

“Before Christmas, the internet was full of threats against us,” he said. “The police have warned us several times of the danger of attacks by radical Muslims. I have therefore written to the Interior Ministry and asked for protection.”

Twenty-one Egyptian Copts were killed in the coastal city of Alexandria early on New Year’s morning when a suicide bomber blew himself up outside a church. A further 79 people were injured.

The Coptic Christian minority, which makes up about 10 percent of the predominantly Muslim nation, has angrily claimed the Egyptian Government of President Hosni Mubarak has long neglected to protect its followers.

German Chancellor Angela Merkel on Monday condemned the bombing as “barbaric” and called on Cairo to ensure the safety of its Christian citizenry.

“I received the news of the awful attack on a church in Alexandria with disgust and anger,” Merkel said in a letter of condolence to Mubarak, according to a government statement. “I thank you for the measures already introduced to protect Coptic Christians in Egypt and am convinced that you will do everything in your power to prevent further incidents like this in the future.”

This was echoed on Monday by senior German politicians from both sides of the spectrum.

Deputy chairwoman of the conservative Christian Democratic Union and Education Minister Annette Schavan demanded the Egyptian government to distance itself more clearly from such religious attacks.

“Muslim authorities in Cairo and elsewhere must take an unambiguous position against all forms of violence in the name of religion,” she told daily Hamburger Abendblatt. “They must make clear that they reject violence against other religions.”

Greens parliamentary leader Volker Beck told the Frankfurter Rundschau that Egypt and other states such as Nigeria that had recently experienced religious attacks had to act more firmly to stamp out such violence.

“A condemnation of such attacks is not enough,” Beck said. “Egypt and other states must firmly confront the demon of religious intolerance.”

Egypt was effectively a dictatorship, he said. Germany and other countries had long failed to take a hard enough line against its undemocratic government because it remained a convenient ally in the Middle East.

“The West, out of foreign policy considerations, systematically looks the other way,” Beck said.

Germany had the ability to influence Egypt but had “not fully used” it, he said.

Hans-Peter Uhl, foreign and security spokesman for the Christian Social Union – the CDU’s Bavarian sister party – warned violence by Islamic extremists could spill over into Germany. He called on moderate Muslims to clearly distance themselves from such violence.