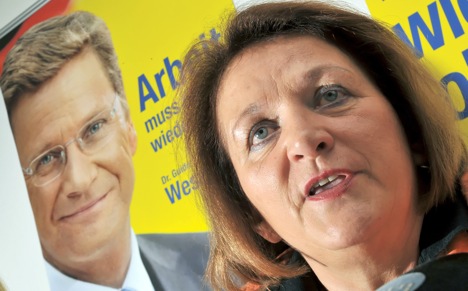 Leutheusser-Schnarrenberger said Westerwelle had scored some “very clear successes” as foreign minister, and added, “His poor poll ratings have more to do with the performance of the party as a whole.”

She also denied any ambition to take over as party leader following the withering criticism of Westerwelle in recent weeks. “I’m not concerned at all with being a candidate for the party leadership,” she said in an interview with the Hamburger Abendblatt newspaper.

But Leutheusser-Schnarrenberger was also equivocal on Westerwelle’s future, pointing out that a new leading committee would be chosen at the FDP party conference in May.

“We should leave it entirely up to him whether he wants to put himself forward as chairman again,” she said.

She also called on Westerwelle to deliver a “substantial, precise speech” at a crucial meeting of the party leadership on Thursday. “He has to make clear where the FDP’s priorities are, and what positions it wants to take in the government.”

The minister also used the interview to praise the FDP’s young General Secretary Christian Lindner. Lindner was “already one of the most popular people in the party, who was working on our programmatic renewal. I think he’s an excellent man.”