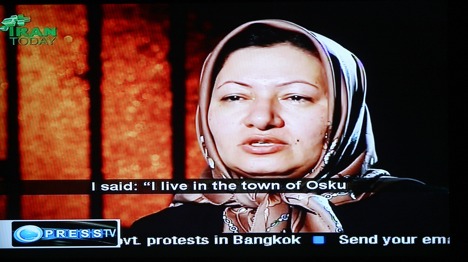 “I have told Sajjad (her son)… to sue the ones who have disgraced me and the country,” Sakineh Mohammadi Ashtiani told reporters in the northwestern city of Tabriz where she was tried.

She named those she wants to sue as “the two Germans”, her former lawyer Mohammad Mostafaie, Germany-based anti-stoning campaigner Mina Ahadi and her husband’s convicted murderer Issa Taheri.

“I have a complaint against them,” she said.

The two German journalists from Bild am Sonntag were arrested on October 10 in Tabriz for interviewing Ashtiani’s son and family lawyer who were also taken into custody.

Iran says the two entered the country on tourist visas and failed to obtain the necessary accreditation for journalists from the authorities before “posing as reporters” when they contacted her family.

Ashtiani was speaking to foreign media based in Iran at a brief conference organised by judiciary officials on Saturday.

“I have come in front of the cameras at my own will to talk to the world,” said the woman who has been jailed since 2006.

“I am willing to talk because many people exploited (the case) and said I have been tortured, which is a lie,” she said, speaking in Persian with a thick accent of the Azeri tongue of the northwestern region from which she hails.

“Leave my case alone. Why do you disgrace me?” she asked.

Mohammadi Ashtiani, a 43-year-old mother of two, was sentenced to death by two different courts in Tabriz in separate trials in 2006.

Her sentence to hang for her involvement in the murder of her husband was commuted to a 10-year jail term by an appeals court in 2007.

But a second sentence to death by stoning on charges of adultery leveled over several relationships, notably with the man convicted of her husband’s murder, was upheld by another appeals court the same year.