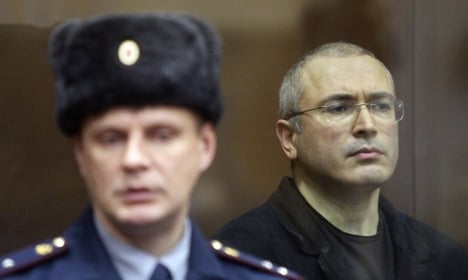 “The German government is very worried by the verdict in the Khodorkovsky case,” deputy government spokesman Christoph Steegmans said in a statement.

“The trial and the sentence raise serious questions about respect for the rule of law and mark a step backward on the path to modernising Russia on which President Dmitry Medvedev had embarked.”

Steegmans said Berlin would continue to keep close tabs on Khodorkovsky’s treatment by the Russian justice system and noted that Germany had frequently called for him to receive a fair trial.

“The announcements by Russian politicians that they plan to respect the rule of law in the future have shown themselves to be hollow,” she said.

“The new trial, the conviction and the sentence itself are clearly politically motivated. The fact he will be locked away for years can only be explained by the fact that Khodorkovsky is apparently seen as political competition by the powerful in Russia.”

Foreign Minister Guido Westerwelle called the latest conviction “regrettable” after a trial that had been marred by “many doubts.”

“It is in Russia’s interest to take the concerns of the international community about the outcome of the trial and how it was conducted into account,” he said.

The Russian court had earlier this week convicted the Yukos oil company founder in his second trial on money laundering and embezzlement charges, a verdict condemned by the United States and other European countries.

Taking into account time served since first his first arrest in 2003, the verdict means that Khodorkovsky will stay in jail until 2017, his official website said.

Russia and Germany have a lucrative trade relationship. Russian exports to Germany reached €25 billion ($33 billion) in 2009 while Germany exported nearly €21 billion in goods and services to Russia.