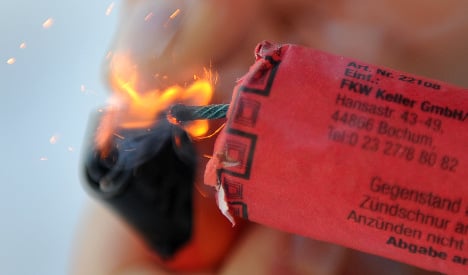 The 37-year-old man’s hand was badly injured on Wednesday when the firecracker went off quickly after it was lit. He was rushed from the town of Deuben where the accident happened to a hospital in Jena.

Doctors had to amputate his left hand. A second man standing nearby was also injured when the firework detonated, albeit not seriously.

Police are investigating the remaining batch of fireworks that were in the men’s possession. The type and origin of the firecrackers were not immediately known.

Fireworks are legally available in Germany from December 29-31 each year. They must be purchased by someone over 18 and cannot be used beyond January 1. Germans spent a total of €113 million on fireworks last year.

This year, authorities are cracking down on use of fireworks in areas close to churches, hospitals and historic buildings. While the rules vary from city to city, people breaching the no-fireworks zone regulations face fines up to €50,000.