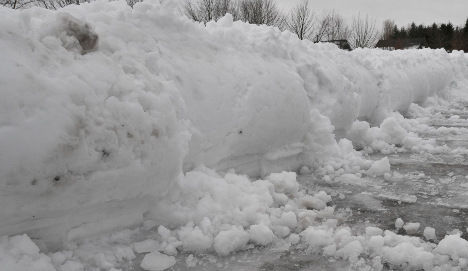 The man in the village of Zahlbach, Lower Franconia, was working in the stream when two cubic metres of snow was dislodged from a hillside next to the stream’s three-metre high bank and piled down on top of him.

The man was buried under the snow with his face in about 15 centimetres of water. His girlfriend found him and raised the alarm. Neighbours uncovered him but, after an hour-long fight for life, the man died.

His girlfriend was taken to hospital suffering shock.

It is not clear for how long the man was buried. It is also uncertain whether he actually drowned in the stream or suffocated under the weight of the snow. No post-mortem is planned because there was no sign of foul play, police said.

Police said the man was trying to clear an ice blockage from the stream, which ran next to his house.

Mayor Waldemar Bug said several factors had combined unluckily in the man’s death. The village had tried to clear as much snow as possible but it remained piled at up to 2.5 metres depth in places. The scene of the accident was a millstream through which barely any water flowed. He could not explain why the man had wanted to break up the ice there.

The accident follows the freezing-death of a 16-year-old girl in Lower Saxony on the weekend.

The German Weather Service (DWD) forecasts more bitter cold Wednesday and overnight in the eastern parts of Germany, while the west will be milder.

The brutal weather is clearly testing the patience of many people across Germany. A man in the town of Bad Hersfeld in Hesse called police three times threatening to blow up his rented house because of a quarrel with the property management over snow clearing.

“Come quickly or I’ll do it, I’ll blow the place up,” the man said, according to police.

When police responded, the man assured them he had never intended to blow up the house. The officers searched the house and cellar to be on the safe side.

The man said he was angry that he had been clearing snow from the premises and the footpath for years. The property managers planned now pay him €50 for the work, but he was refusing to accept the money – apparently because he thought it was too small an amount, police believed.