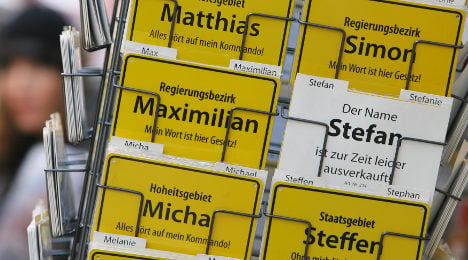 According to the website beliebte-vornamen.de, the name Lena also rated highly for girls – an apparent tribute to Eurovision Song Contest winner Lena Meyer-Landrut.

Mia and Leon, have even extended their leads over other favourites since last year, the site reported. In second and third place for boys were Lukas and Ben for boys and Hannah and Lena for girls.

The site is run by private researcher Knud Bielefeld from the town of Ahrensburg in Schleswig-Holstein, who collected data on more than 140,000 birth registrations – roughly a fifth of all births in the country – from about 390 state offices.

Bielefeld noted that Lena in third place for girls was particularly interesting given Hannover’s favourite daughter this year was Lena Meyer-Landrut, who rocketed to stardom in the wake of her victory in the Eurovision Song Contest.

Lena, normally short for Helena or Helene, has been reasonably popular since the 1980s but jumped in this year’s rankings. Bielefeld said there were parallels with Nicole, the German singer who won the contest in 1982 and whose name became popular – but then went out of fashion.

“I suspect that it will be the same with Lena,” he said.

Both Mia, which is a shortened form of the biblical name Maria, and Leon were rarely given as names 20 years ago. But each has steadily grown in popularity since then.

One name that has particularly gone out of fashion in the past two decades is Kevin. The most popular name for boys in 1991, Kevin is now associated by many people with less-educated groups and has plummeted to 124th place.

There are no official statistics for first names. The government-funded Association for the German Language also puts out a list each year.

According to the association’s 2009 list, Marie and Maximillian were the most common names – which came in 12th place and 8th place respectively in Bielefeld’s 2010 list.