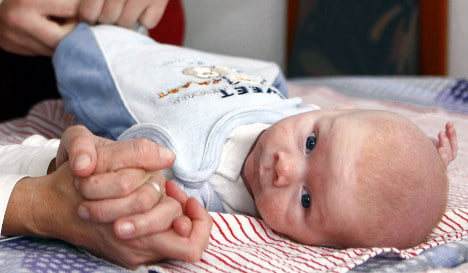 The Federal Statistical Office (Destatis) has calculated that 510,000 babies were born between January and September, according to a report in daily Süddeutsche Zeitung. For the same period last year, the figure was 492,000 babies – a rise of 3.6 percent this year.

The rise comes as good news in a country that has seen its fertility rate steadily fall, which experts say will inevitably pose severe demographic problems in the future. Keeping Germany’s skilled economy ticking and funding welfare payments such as pensions in an ageing society, will prove much harder without a higher birthrate or more immigration.

At no time in the past 10 years has the birth rate jumped so quickly. The rise is all the more remarkable, Destatis said, because the number of potential mothers has been steadily sinking. Each year there are about 300,000 fewer women in the age range of 15 to 45 who can typically have children. Yet this smaller group of mothers seems to be having more children.

Destatis stressed the figures were preliminary and could change, though in previous years, such preliminary numbers have proved accurate.

For some years, the birth rate has languished between 1.36 and 1.38 children per woman. The only recent year in which this rate rose was 2007 – and even then it was not a dramatic rise – from 1.33 to 1.37, after the government introduced the Elterngeld or parenting payment.

In that year, German women had 12,000 more babies than they had the year before.

The precise birth rate for 2010 won’t be clear until the full year’s figures have been tallied. However it appears that the country has produced 18,000 more babies than in 2009.