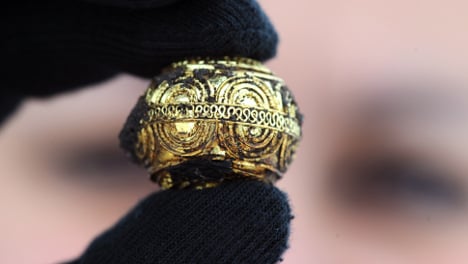 The noblewoman’s tomb, dating from early Celtic times, measures four metres by five metres, and is exceptionally well-preserved. It contained gold and amber jewellery that makes possible for the first time the precise dating of an early Celtic grave.

Using heavy cranes, the excavation team lifted the entire burial chamber out of the ground as a single block of earth and placed it on a special truck so that it could be carried off for further analysis.

The dig leader and state archaeological chief Dirk Krausse labelled the find a “milestone of archaeology.”

Judging by the ornamentation in the chamber, the archaeologists believe the tomb was built for a woman from the nobility of the Heuneburg fort, though this couldn’t be said with certainty until further investigations could be made under laboratory conditions.

Click here for a photo gallery of the dig.

This will be done by the State Office for the Preservation of Monuments in Stuttgart. Initial results are expected to be announced in June 2011.

The Heuneburg hill fort site is considered one of the most significant archaeological sites in central Europe and possibly the oldest settlement north of the Alps.

It has been the focus of intense interest because it reflects socio-political developments in early Celtic Europe when, after about 700 BC, wealth, population and political power began to be concentrated in small areas.

It was the area of a large settlement from about 700 BC and became one of the key centres of power and trade in southern Germany.