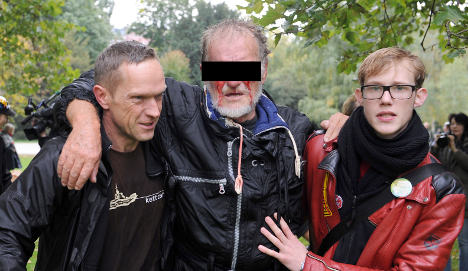 Dietrich Wagner, 66, remains almost completely blind after he was hit directly in the face by a police water cannon after a protest against the controversial rail project turned violent last September.

“My independence is gone. I have to be looked after like a little child,” Wagner told Stern magazine.

He told Stern he wanted an apology from Mappus to Stuttgart’s citizens.

He could no longer read or ride a bicycle as he had before. His partner had to help him with basic daily tasks such as shaving and getting dressed.

When he pours a glass of water, for example, “I hold a finger in the glass, so I know when it is full,” he said.

Soon he will start using a blind person’s cane, he said. He is blind in one eye and has about 8 percent vision in the other.

Wagner insisted he bore no responsibility for his injuries, as a police spokesman had previously suggested. He said he had expected to get wet or to “get a couple of bruises” from the water cannon “but not to be blasted blind.”