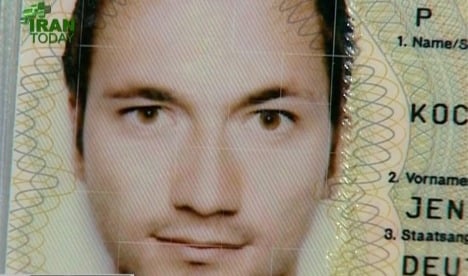 One of the reporters being detained in Iran. Photo: DPA

The relatives were allowed to meet the two men late Monday in the northwest city of Tabriz, about 530 kilometres northwest of the capital Tehran, where they are in jail, Iranian foreign ministry spokesman Ramin Mehmanparast told reporters.

“Yesterday, they went from Tehran to Tabriz and they met the two detainees,” Mehmanparast said.

He said before going to Tabriz, the family members met Iran’s Foreign Minister Ali Akbar Salehi, who had been “very active” in arranging the meeting.

“Their case will be decided by the judiciary and if found innocent the two Germans will be released,” Mehmanparast said.

German Foreign Minister Guido Westerwelle thanked his Iranian counterpart for his “support”, in a statement published on the foreign ministry website.

But Germany wanted to see them freed and allowed to return home, he repeated.

The official news agency IRNA reported that the foreign ministry “has made it possible for two German nationals arrested in Iran to meet their families” after Westerwelle had appealed to Salehi.

The request had been granted “on humanitarian grounds” and took into account the Christian holiday season, IRNA said.

“The German foreign ministry and the German embassy had been informed,” it added.

Moussa Kahlilolahi, the general prosecutor in the city of Tabriz had announced the meeting on Monday in a statement carried by the official IRNA news agency.

promises” from the Iranian side, German foreign ministry spokesman Stefan

German weekly Bild am Sonntag has said its two employees, who have not been named, travelled to Iran to investigate the case of Sakineh Mohammadi-Ashtiani, a woman sentenced to death by stoning for adultery.

They were arrested on October 10 in Tabriz together with the son and family lawyer of Ashtiani, whose case has sparked international outrage and diplomatic intervention by several Western governments as well as the Vatican.

Iran says the two entered the country on tourist visas and failed to obtain the necessary accreditation for journalists from the authorities before “posing as reporters” when they contacted her family.

Iran’s prosecutor general Gholam Hossein Mohseni Ejeie said on December 5 that the two Germans were being investigated for illegal entry to the country, but denied they faced espionage charges.

“These two did some violations after entering the country, which is under investigation. Nobody labelled them as spies,” he was quoted as saying at the

All journalists working for foreign media in Iran must obtain accreditation from the ministry of culture and Islamic guidance in order to work in the Islamic republic.