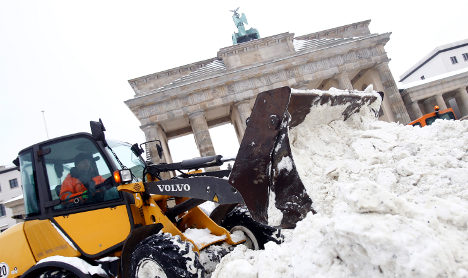 Taken together, the German capital and the surrounding state of Brandenburg have on average had the most snow in about 110 years, the DWD said. In places, the snow was 40 centimetres thick. And parts of the capital may have broken records entirely, with more snow than ever before.

“In the Berlin area we have never had so much snow in December,” a DWD meteorologist in Potsdam told daily Die Welt.

The white Christmas in the capital was also a rare event. The last white Christmas Berlin experienced before Saturday’s was in 2001 when there was a modest 10 centimetres’ cover on the ground.

“In past years it has also started well, but the warmer weather has totally ruined it,” the meteorologist said.

Transport will continue to be disrupted in coming days, with rail services expecting delays and some cancellations. The ADAC car club, meanwhile, warned of long traffic jams because of snow and ice.

Further snowfall is expected in parts of Germany in the next few days. In the northeast, fresh dumps may also push the snow depth to new records the DWD said.

The city government in Hamburg began clearing and gritting major traffic and public transport routes about 6 pm Monday night. But because the snow continued to fall in to the night, authorities were forced to deploy at extra 80 small gritting trucks and 620 workers around 2 am.

Some 50 passengers were trapped for two hours in a stranded high-speed ICE train after a power outage not far from its final destination Hamburg. Just past midnight, the unlucky travellers were forced to sit in darkness without heat until another train was sent to pick them up.

In Berlin, late shifts were extended and early shifts brought forward to cope with the snowfall, which meant about 2,100 staff worked through the night.

Temperatures in many parts of the country will sink this week into the minus double-digits.

After early fog, Tuesday will be cloudy or misty. Cloud gathering in the west and southwest could bring snow and sleet. High temperatures will range from -10 degrees Celsius in the east to 2 degrees in the very far west.

Otherwise, skies will be mostly clear. Temperatures will fall to as low as -20 degrees in the east. Lows in the west will be a comparatively balmy -2 degrees.

Wednesday will bring brighter and drier weather to the east, though skies will remain cloudier in the west, where isolated snow and rain will persist. Black ice will be a big danger in western areas. Temperatures will reach -13 degrees in the east and up to 2 degrees in the west.