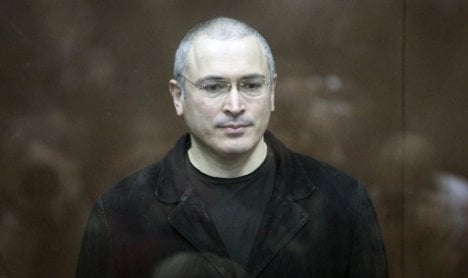 “The way the trial has been conducted is extremely dubious and a step backward on the road toward a modernisation of the country,” he said in a statement.

“It is in the interest of our Russian partners to take these concerns seriously and to stand up for the rule of law, democracy and human rights.”

Westerwelle, who is also Germany’s vice chancellor, brought up Khodorkovsky’s second trial during a visit to Moscow November 1 and said top German officials were closely following the case.

Deputy government spokesman Christoph Steegmans opened a regular briefing earlier Monday with a statement underlining Berlin’s serious concerns about the trial but declined to comment on the verdict until it is published.

“For the German government, respect for the rule of law in trials, as President (Dmitry) Medvedev has called for and as the chancellor (Angela Merkel) has frequently said, are being put to the test with this trial,” he said.

“Respecting the rule of law in trials is of the greatest importance for the development of a modern state based on the rule of law in Russia. The German government has followed this trial critically from the start and will continue to watch how it develops with close attention.”

Asked whether Berlin would consider “consequences” for Russia over the trial, Steegmans declined to comment until German officials had read the complete verdict against Khodorkovsky.

Khodorkovsky’s supporters see him as a martyr punished for daring to challenge Prime Minister Vladimir Putin by financing opposition parties but Russian officials view him as a corrupt mogul who profited by breaking the law.

Germany’s ambassador in Moscow, Ulrich Brandenburg, had told Interfax Saturday that Berlin saw the latest verdict as a test of the rule of law and said that the case had spooked German investors in Russia.

The two countries have a lucrative trade relationship. Russian exports to Germany reached €25 billion ($33 billion) in 2009 while German exported nearly 21 billion euros in goods and services to Russia.