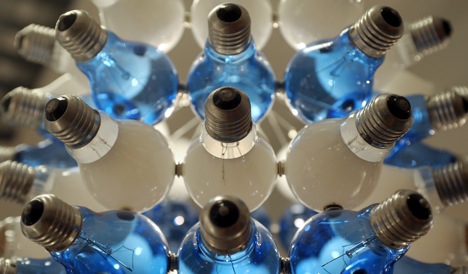 Wulf Herzogenrath, curator of the Bremen gallery, said, “In every gallery there are artworks with beautiful light bulbs. They cannot simply be replaced.” This form of lighting is part of the authentic effect of the work, he claimed.

The art historian told the DAPD news agency that in the Bremen Kunsthalle alone, two important works, ‘Lichtraum’ by Otto Piene and ‘Videosynthesizer’ by Nam Jun Paik, both incorporated light bulbs as essential elements. Herzogenrath said that many 1960s artists used everyday objects in their work.

But the curator was confident that the EU’s phasing out of incandescent light bulbs would not threaten the illuminating oeuvre of Piene and Paik just yet. “We have a reserve that will last for my lifetime and that of my children,” he said, brightening up, and he thought most other museums were equally well stocked.

The EU is phasing out the production and trade of conventional light bulbs and halogen lamps in favour of more energy-efficient compact fluorescent lamps or LEDs. One-hundred-watt lamps have been unavailable since September 2009, while clear 75-watt bulbs disappeared in September 2010. By 2012, all 40 and 25-watt bulbs will also be switched off. Halogen lamps will be phased out by 2016.

The more enlightened German art and architecture scene has organized a petition calling for a repeal of the ban. Apart from Herzogenrath, signatories include such leading lights as Andreas Gursky, Georg Baselitz, Thomas Demand and Carsten Höller.