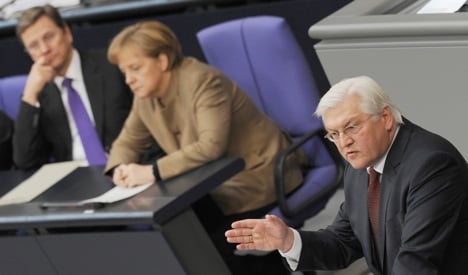 Steinmeier says the SPD will only vote for the extension if the government stipulates that German troop withdrawals begin in 2011.

“This is a question of credibility,” Steinmeier told the Bild am Sonntag newspaper. He pointed out that the Afghanistan mandate agreed in January 2010 had already foreseen the beginning of the withdrawal. This has to begin in 2011.

Steinmeier also criticized Chancellor Angela Merkel’s choice of language on her recent trip to Afghanistan, when she spoke of “war.”

“The chancellor is aping the Defence Minister,” the SPD’s parliamentary group leader said. “I don’t know what this ambition is all about.”

He said the government should try and do less PR work, and put more effort into preparing the end of the operation. The Bundestag parliamentary vote on the issue takes place in January.

The SPD is currently experiencing a mild recovery in the opinion polls, with a recent Emnid survey putting their ratings at 27 percent – one point more than last week.