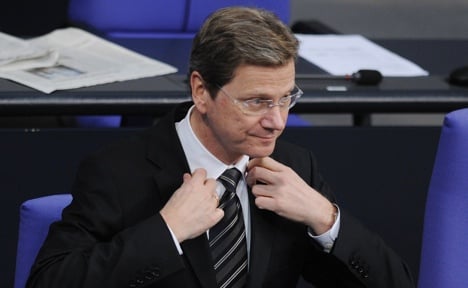 According to the survey carried out by Emnid for the news magazine Focus, only 29 percent of Germans were against his resignation as FDP party leader.

Some 68 percent of Green party and Left party supporters think Westerwelle should go. Among supporters of the main opposition Social Democratic Party (SPD), 59 percent were in favour of the resignation.

But more worryingly for Westerwelle, more than half of supporters of the Christian Democratic Union (CDU), the FDP’s coalition partners in government, wanted him out.

Nevertheless, Westerwelle will perhaps be cheered by the fact that despite increasing criticism from influential regional leaders of his party, 77 percent of FDP voters still want him in charge.

Since reaching a popularity-high in the September 2009 federal election with more than 14 percent of the vote, the pro-business FDP have plunged to an approval rating consistently below 5 percent – the threshold for holding seats in the Bundestag under Germany’s parliamentary system.

Westerwelle has been lambasted for some of his public remarks and is widely perceived as failing to push the party’s agenda within the coalition.