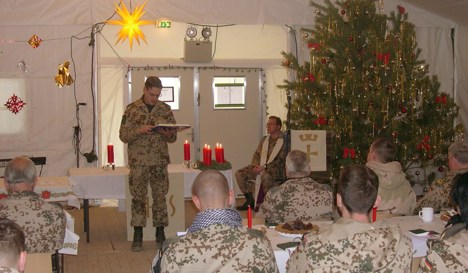 A few changes to the routine have been made for Christmas in the German army base in Afghanistan, army spokesman Ullrich Burchardi said in a statement. A brunch has been organized to follow the morning service, and a Christmas market has also been set up.

In an attempt to re-create traditional German yuletide cheer in the Hindukush mountains, mulled wine and German coffee will be served at the market. Traditional fare like roast duck, dumplings and red cabbage would also be served at mealtimes.

“We try to do something good for the soldiers at Christmas,” a Bundeswehr spokesman in Potsdam, near Berlin, said, but the absence of friends and family is hard to compensate. “It’s a particularly emotional time,” added the spokesman, who himself spent two Christmases in Afghanistan.

The soldiers were offered support by Chancellor Angela Merkel and Defence Minister Karl-Theodor zu Guttenberg, who made surprise visits to Afghanistan last weekend. During the trip, Merkel for the first time openly admitted that the German army was fighting a war there. The Afghanistan mission has so far cost 45 Bundeswehr soldiers their lives.

Merkel and Guttenberg thanked the soldiers, praised their work and wished them and their families a happy Christmas. Germany’s military withdrawal from the region may begin in 2011.