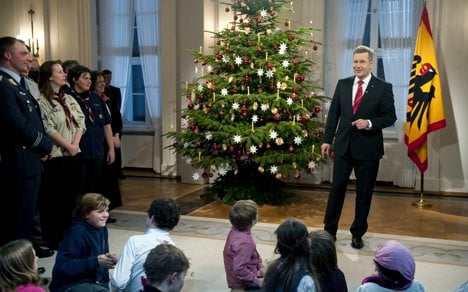 “Solidarity, understanding, getting along – these things don’t happen on their own. We have to work for them,” Wulff said in the speech at Bellevue Palace in Berlin, the president’s official residence. “Our society lives on those who can see where they are needed, and don’t endlessly think about whether they should get involved and take responsibility.”

Over 200 people were invited to take part in the recording of the address, of whom around 190 soldiers, clergymen, children, scouts, athletes, nuns and volunteer community workers accepted the invitation. Instead of making the speech from behind a desk like his predecessors, Wulff stood before these guests as he spoke.

In a speech that enthusiastically embraced the country’s multicultural reality, the president said German society was “free and colourful.” “We live in different spheres of life,” he added. “We are different in our origins, our religion, our education and our dreams of happiness. For a society of such diverse people to last, we need one thing most of all: respect. Respect for people who are different from ourselves.”

Wulff also said that Germany’s values were recognized internationally. “Our country is highly respected. Our free and tolerant society, and our reliability for large and small countries alike, is valued everywhere,” he said, before reiterating Germany’s commitment to the European Union.

“We expect the same from our partners,” the head of state warned. “Everyone has to do their homework. We have faith in European unity and in the power of Europe.”

Wulff said that German soldiers, policemen and development workers worked abroad to promote development, peace in the world and to fight terrorism. “Our thoughts are with them and their partners, children and parents, who will be missing them especially during the holidays,” he said.