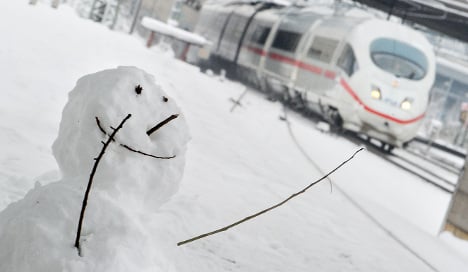 Travellers desperate to reach their holiday destinations have for days battled problems with planes, trains and automobiles caused by brutal ice and snow.

Improved weather made it possible for Lufthansa to end the special flight schedules that have been in operation since the weekend, spokesman Thomas Jachnow said Wednesday morning.

All planned international flights will take place – though problems with flights to Heathrow, London could still be expected because of that airport’s own severe delays.

Starting Wednesday, national railway Deutsche Bahn will also operate more trains on heavily trafficked routes to compensate for the growing number of holiday travellers opting for the train over driving or flying. The company estimated an extra 50,000 to 100,000 passengers per day are using the rail network.

Lufthansa is still asking travellers to take alternative modes of transport if possible, owing to the massive backlog of passengers waiting to fly. Passengers should also arrive at the airport at least three hours before take-off, Jachnow said.

Frankfurt Airport, which had to be shut down entirely for several hours Tuesday morning, also said it would be back to business as usual on Wednesday. All three runways were operating, said Heinz Fass, spokesman for airport operator Fraport.

Nevertheless, some 68 flights – 49 landings and 19 take-offs – had to be cancelled Wednesday morning because of problems at other European airports. “That has nothing to do with Frankfurt,” Fass said.

On Tuesday, some 600 flights had to be cancelled, leaving thousands of travellers stranded. About 5,000 passengers had to spend Tuesday night in Frankfurt hotels. While there was still a huge backlog, operations were gradually returning to normal.

German Transport Minister Peter Ramsauer meanwhile defended the government’s readiness for snow-caused problems, saying there had been no glaring failures. Ramsauer said he had been careful to ensure the salt supplies were sufficient for de-icing and that motorists adhered to winter tyres laws.

Nevertheless, he said he understood why there was “tremendous anger” among a great mass of travellers who were struggling to reach Christmas destinations.

Through at least December 29, Deutsche Bahn will run additional Intercity trains on important north-south and east-west routes at the expense of less-travelled connections. The extra trains will travel from Cologne and the Ruhr to Berlin, Hamburg to Munich, Hamburg to Basel via the Ruhr Valley and Stuttgart.

Customers can see the new train times online at www.bahn.de.

“We hope these schedule changes will allow us to avoid overfilled trains on main routes while still not leaving passengers stranded on minor routes,“ said DB board member Ulrich Homburg.

Passengers losing their reservations due to the altered schedule can have their tickets refunded at no charge.