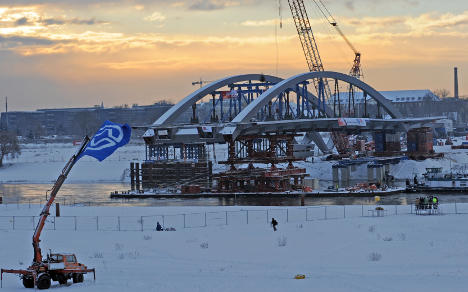 If this year is as bad as the last, the elements will prove costly to Europe’s manufacturing and export-driven giant, experts say.

Volcker Treier, chief economist at the Association of Chambers of Industry and Commerce, said that a tough winter would cost German industry about €3 billion.

“A winter like the one we experienced at the start of the year, leads to losses of up to 0.5 percentage points of quarterly growth,” he said.

The building industry has been hit hard by the cold because projects cannot be started on time owing to worse-than-expected snow and ice, slashing its December sales by half. The industry normally brings in €7 billion to €8 billion in sales during December, the sector’s main body the ZDB said.

Work could barely take place outdoors, she said. Few contracts were made for the months of January to March when weather is also expected to make work difficult.

“In four out of 12 months, nothing happens – it wasn’t so acute in previous years.”

The logistics industry is also suffering, with trucks having to slow down or getting caught in lengthy traffic jams. In the industrial powerhouse state of North Rhine-Westphalia, trucks are banned from driving on the autobahn under a directive issued Monday.

While GDV spokeswoman Katrin Rüter said it was too early to guess the cost of this winter, but if the weather stayed nasty for as long as the last one, the bill would be similarly huge.

Local governments are also having to fork out. The German City and Municipal Association said last winter cost an additional €3.5 billion for services such as snow-clearing and repairing damage.

“If the winter is as long and hard this time – and it’s starting to look that way – that can easily get even worse,” said association head Gerd Landsberg.

The most expensive thing was not clearing snow and debris, but rather repairing damage to the roads caused by ice getting into cracks and expanding, creating massive fissures and potholes.

“The damage from last winter still hasn’t even been all repaired,” said Landsberg.

Municipalities were responsible for 450,000 kilometres of roads, he said.

Transport obviously has also been affected. Airline Lufthansa recommended people travel by train because of the weather, and announced that air tickets could be exchanged for train tickets. Deutsch Bahn, however, urged people to steer clear of rail travel if possible, on the grounds that they expected crushing congestion.

A spokesman for Deutsche Bahn said it could not yet be estimated what kind of financial damage the operator would suffer because of the harsh cold. However the operator has to deal with higher costs, investing for example in more de-icing programmes.

The German Airline Association likewise said it was too early to count the cost of the weather, though it would be damaging.

“It’s not nice, either for the airports or the airlines,” spokeswoman Carola Scheffler said.