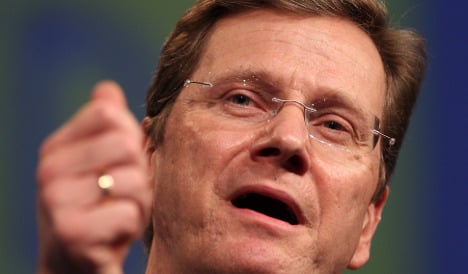 “It is, in any case, an achievement to fall so far within a year from extremely high poll figures,” said Sander.

Since reaching a popularity-high in the September 2009 federal election with more than 14 percent of the vote, the pro-business Free Democrats (FDP) have plunged to an approval rating consistently below 5 percent – the threshold for holding seats in the Bundestag under Germany’s parliamentary system.

A survey published Tuesday by Stern magazine and broadcaster RTL found that just 3 percent of voters would back the FDP if a general election were held this weekend, which is a 15-year low for the party.

Westerwelle, who has been lambasted for some of his public remarks and is widely perceived as failing to push the party’s agenda within the coalition with Angela Merkel’s conservative Christian Democrats, increasingly appears to be the lightning rod for criticism within the party.

The vice president of the Lower Saxony parliament, Hans-Werner Schwarz, also from the FDP, told the same paper it made sense for Westerwelle, who is also vice chancellor as well as foreign minister and FDP leader, to concentrate on one job.

Schwarz said Westerwelle had given a good performance as foreign minister, and he should keep this job. The party should, however, choose another leader at its annual conference in May, he said.

The criticism from Lower Saxony contrasts sharply with the defence of Westerwelle given by the party’s leader leader in that state, federal Health Minister Philipp Rösler.

The calls for Westerwelle’s resignation follow the revelation last week that the state FDP branches facing election battles next year, in Baden-Württemberg and the Rhineland-Palatinate, wrote an open letter to Westerwelle asking him not to campaign on their behalf.