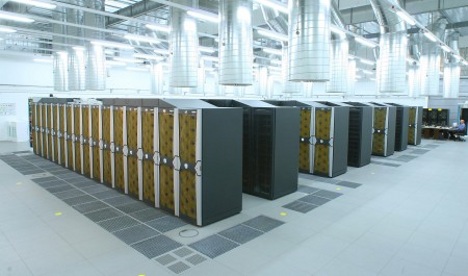 The Leibniz Supercomputing Centre at the Bavarian Academy of Sciences and Humanities in Munich has announced the order of the SuperMUC, a massive supercomputer that will run at 3 ”petaflops” – at least twice as fast as the current European champion.

It will be among the fastest supercomputers in the world, Dr Ludger Palm, who is responsible for the centre’s public relations, told The Local on Monday.

“It is a remarkable increase,” Palm said. “Although it’s not important for us to say we’ve got the fastest computer. By nature if you spend this much money, it should be the fastest, otherwise it makes no sense to buy a very expensive thing like this.”

While scientists around Europe will be clamouring to use the new machine, Palm said the acquisition was less about prestige than about the hard science that could be done.

“What we are very proud of is the outcomes, the scientific results. With this computer, you’ll be able to do simulations that you couldn’t think of before.”

The SuperMUC will use more than 14,000 Intel Xeon processors and be able to achieve the work of more than 110,000 PCs.

This will give it the sheer brute strength to make up to three quadrillion calculations per second (that’s a three followed by 15 zeroes.) Crunching huge amounts of data was especially useful for creating very complicated simulations, such as earthquake behaviour and models of viruses or even complete human cells, Palm said.

One example was building computer models the earth’s interior – a field in which the SuperMUC’s predecessor, the HLRB II, has already made a ground-breaking contribution.

It would be a long time before scientists can actually predict an earthquake’s occurrence, Palm said. But the new computer should help them predict the impact of an earthquake when it does happen.

“Using a computer like might save many, many lives,” he said. “You can … take a particular point on the globe and ask what happens if an earthquake of a certain strength happens at this point? You then simulate the propagation of the earthquake waves to get an impression of where the damage might be. For example, how high will the tsunami be? You can calculate which areas need to be evacuated.”

Scientists also hope to make breakthroughs in making computer simulations of viruses and cells. The existing HLRB II has been used, for instance, to simulate viruses to fight diseases by showing, for example, how effective a pharmaceutical compound might be.

“We try to understand how the proteins in the virus move.” Palm said. “If you apply force to a certain point on the virus surface, how will the surface behave? Will it crack or not? It gives you much more leverage to deal with diseases.”

Viruses, from a biologist’s perspective, are relatively simple things. The next step will be simulating entire cells.

“They’ll definitely need a much larger computer than the computers of today to do it. You have so many data points and many systems – enzymes and proteins and things you have to simulate.”

The computer will also be useful for the massive quantities of data-crunching needed for high energy physics such as that being done in the famous Large Hadron Collider at CERN outside Geneva, to explore the essence of matter and the origins of the universe.

Although the SuperMUC is just another step forward in computing muscle and will probably soon be overtaken by others, it is revolutionary in that it will employ a new cooling system that – oddly enough – uses warm water.

The computer chips will be cooled not by air like most supercomputers, but directly by water pumped in at about 40 degrees Celsius. The water comes at out about 65 degrees and can then be used for other purposes such as building heating – making it also one of the world’s greenest supercomputers.