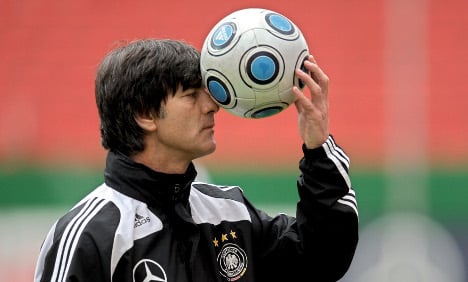 “Looking back, together with Spain we really are one of the most consistent teams. In the last two years our performances have got better and better … It’s only when this happens that you can win championships.”

Germany finished third in the World Cup in South Africa earlier this year, demolishing England 4-1 and Argentina 4-0 in some of the tournament’s most exciting football. They lost to eventual winners Spain in the semi-finals.

Germany have four wins from four qualifiers for Euro 2012, due to be held in Ukraine and Poland, and are top of Group A with a five-point lead over their rivals.

Löw, whose trademark “lucky” blue cashmere sweater worn during the World Cup sold for €1 million ($1.3 million) for charity on Saturday, also rejected accusations there were too many youngsters in the side.

“I have ascertained that quality and technical ability are more important than experience. I don’t care if someone is only 18 and has only played 10 Bundesliga games,” Löw said.

“I measure players but what they can they do and by what possibilities I see for them.”

In 2011, they face Italy in a friendly in Dortmund, western Germany on February 9 and then South American giants Brazil in August at home, as well as five more Euro 2012 qualifiers.

Löw also said that the Italy clash would be too early for Ballack – who would have captained Germany in the World Cup but for injury – to return to the side.

“I know from talking to him that he is really fighting to make a comeback and wants to remain as a player in the national side,” Löw said.

“But he was injured for half a year. We have to give him some time to return to form … He is not fully back in training with the team (Bayer Leverkusen) and before February 9 there are only four Bundesliga games.”

Ballack returned to the Bundesliga at the start of the season after four years with English side Chelsea, and joined Leverkusen, but a serious knee injury on only his third game back saw him miss the rest of 2010.

Last week he accused Philipp Lahm, who captained Germany in the World Cup, of a lack of “respect” after the Bayern Munich defender said he hoped to stay in charge even if Ballack came back.

In his absence, Bayern star Bastian Schweinsteiger and Real Madrid’s Sami Khedira have formed a strong midfield partnership for the national side and Ballack has admitted he may struggle to win back his place.