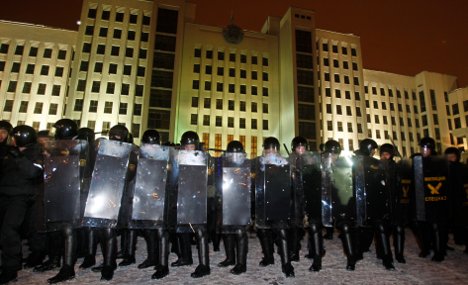 “I am very worried by reports that have emerged from Minsk since last night,” he said in a statement.

“It is unacceptable for opposition candidates and their supporters who want to practice their right to freedom of expression to be bullied, beaten or arrested.”

Westerwelle and his Polish counterpart Radoslaw Sikorski had made a rare joint appeal to the Belarusian government in Minsk in November to ensure free and fair presidential elections.

“After we made clear to the Belarusian leadership ahead of the vote the importance of respecting international standards for elections, we will watch the results of the OSCE review of the election very closely,” Westerwelle said Monday, referring to the Organization for Security and Cooperation in Europe.

Belarus on Monday detained hundreds of protestors, including seven opposition candidates, after smashing a mass rally protesting fraud in the landslide re-election of Lukashenko on Sunday.

Described as the Europe’s last dictator by Washington, Lukashenko received 79.6 percent of the vote in Sunday’s polls on the back of a massive turnout of over 90 percent, the central election commission said.