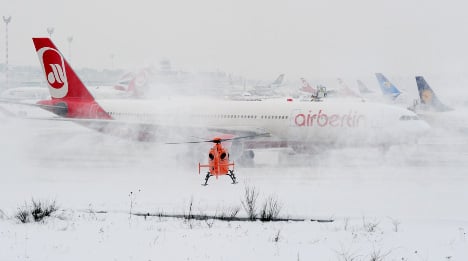 The nation’s largest air hub in Frankfurt had already scratched over 300 flights for the day, according to the airport operator Fraport.

“Things have not returned to normal,” said a Fraport spokeswoman, explaining that a slight thaw had made for icy conditions.

She airport officials were not expecting the situation to improve since the Rhine-Main region was likely to see up to 10 centimetres of new snow throughout the day.

The cancellation of half of all flights in Frankfurt on Sunday forced hundreds of frustrated holiday travellers to spend another night in the terminal.

“I haven’t showered for two and a half days,” said Xavier Nennenman, a US soldier trying to get home to his family in Indianapolis. “I’ve already missed the first family Christmas party.”

With travellers frazzled by repeated cancellations and long lines, Germany’s busiest airport has hired clowns to help them and their children pass the hours.

“Four clowns are performing in the terminal halls,” a spokeswoman told news agency AFP. “We came up with the idea for the kids, who are finding the delays particularly trying.”

The clowns, outfitted in brightly coloured costumes and some parading on stilts, started working over the weekend, after fights broke out at the airport among stressed-out holiday travellers late Friday.

While air traffic at Berlin’s airports remained hampered by the winter weather, conditions in Düsseldorf were improving after dozens of flights had been cancelled on Sunday.

“Only a few flights that didn’t make it here will be cancelled because there are no alternative planes,” a Düsseldorf airport spokeswoman said.

But the roads in the surrounding state of North Rhine-Westphalia remained treacherous, leading the authorities to impose an autobahn ban on trucks heavier than 7.5 tonnes. Heavy snow had shut down some major motorways entirely in the state, according to a police spokesman in Neuss.

Fresh snow in the eastern states of Brandenburg and Saxony was expected to snarl traffic early Monday.

National railway operator Deutsche Bahn also had to contend with the difficult weather conditions, leading to widespread delays and overfilled trains. Many rail connections had been slowed in order to prevent chunks of ice from damaging the undercarriages of trains.

Deutsche Bahn on Sunday recommended anyone able to postpone their travel plans this week do so to help ease the crush. Passengers can have tickets up to Christmas refunded free of charge.

The snow was set to bedevil commuters in Berlin on Monday morning, as the city’s already limited S-Bahn train service was cut further due to weather-related technical problems.