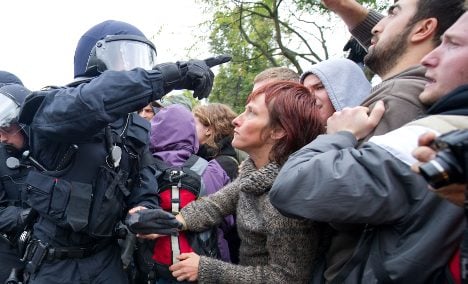 In particular, the word was coined to describe the irate residents of Stuttgart, who gathered week after week to demonstrate against a controversial rail project in the Baden-Württemberg capital.

It stands for the population’s fury over “political decisions made above their heads,” the GfdS said in their annual announcement.

“Stuttgart 21” and another word associated with protest action, schottern, were chosen to as the second and sixth-place words of the year. The latter means refers to attempts by anti-nuclear protestors to render railroad tracks unusable for nuclear waste transport trains by digging up the railroad bed.

The third place word or phrase was Sarrazin-Gen, or “Sarrazin gene,” an ironic reference to former Bundesbank board member Thilo Sarrazin’s controversial theory that the failure to integrate in German society had a genetic basis.

The fourth and fifth place awards went to two words that reflected the current conflict over the online publication of unauthorised material – Cyberkrieg, or “cyber war,” and Wikileaks.

Seventh place went to Aschewolke or “ash cloud,” in honour of the emissions from an Icelandic volcano that crippled European air traffic early in the year.

The annoying Vuvuzela trumpets made famous at the World Cup in South Africa took eighth place.

The neologism Femitainment, which combines the English words “feminine” and “entertainment,” was chosen as the ninth word for its use to describe in the cat fight between feminist Alice Schwarzer and Family Minister Kristina Schröder over different generations of women and their gender roles.

The tenth-placed expression, unter den Eurorettungsschirm schlüpfen, or “to slip under the European bailout umbrella,” referred to the European Union’s bailout of Ireland.

Each year the GfdS selects words and phrases made popular by the German media and public discussion, voting for the term that best embodies the zeitgeist. This year they chose among some 2,000 entries.

Last year’s first place word was Abwrackprämie, or “wrecking premium,” coined to describe the country’s popular cash-for-clunkers scheme, which paid people to junk their old cars as part of the government’s stimulus programme.

In 2008 the word of the year was Finanzkrise, or financial crisis.