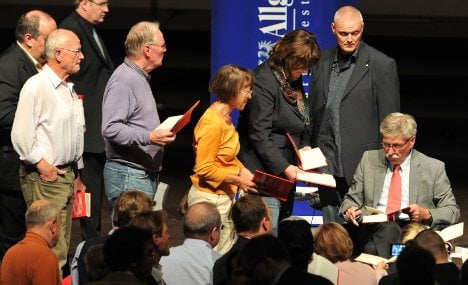 In the book, Sarrazin warns that Germans could become “strangers in their own country” because of integration, and argues that Muslims are not compatible with German society.

He may have been forced to resign from his post at the Bundesbank and fight expulsion from the centre-left Social Democratic Party, but Sarrazin said on ZDF’s talk show Stuckrad Late Night on Thursday that he’d made a pile of money from the book.

When host Benjamin von Stuckrad-Barre estimated that the 1.2 million copies sold had earned his guest €3 million, Sarrazin indicated it was significantly more.

But the sudden wealth has not changed life for him and his wife, Sarrazin said.

“I just say, ‘It will go into the account and then we’ll wait patiently,” the 65-year-old said, adding he still needed to pay taxes on the large sum.

When asked why he waited until his political career was over to publish the book, the former Berlin finance minister said he’d had other issues to tackle, such as the consolidation of the German capital budget.

And there won’t be a another book about his time at the Bundesbank, he said.

“That would be a little too boring,” he quipped.

In the run-up to his first book’s publication, Sarrazin also made several controversial public remarks, claiming that Muslims don’t want to integrate and are making the country “dumber.”

Other controversial statements include that ethnic groups are distinguished by particular genes – for example that “all Jews share a certain gene.”