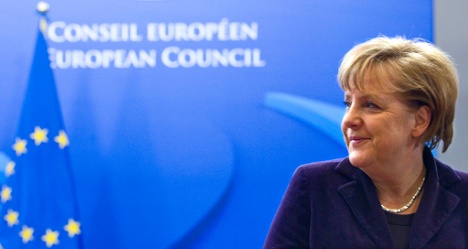 “This is a great day for Europe,” Merkel said after European Union leaders backed Berlin’s push to replace an existing trillion-dollar joint EU-IMF facility with a permanent fund by 2013. “We are committing ourselves to ensuring the overall stability of the euro.”

The summit in Brussels came amid concerns more eurozone nations could eventually require bailouts like Greece and Ireland, which have been rocked by a debt crisis threatening the single currency.

The new permanent rescue fund aims to allow governments that fall on hard times the certainty of a helping hand. The EU’s 27 leaders will discuss on Friday removing the current €750-billion cap on the fund in order to help calm the financial markets.

At Berlin’s insistence, the EU stressed that new loans and guarantees will only be made available if judged “indispensable” by peers, and as with Greece or Ireland, help will only be forthcoming if painful cuts and other changes are enacted.

But Europe’s paymaster made no discernible progress in a similar push for future bailouts to need unanimous backing – which many oppose as it would grant Berlin an absolute veto.

The milestone moment represents the biggest changes to the euro since its creation 12 years ago – which many economists consider flawed due to the absence of a central fiscal policy to accompany the currency area’s shared monetary policy.

Greek Prime Minister George Papandreou best captured the spirit of the evening in Brussels, saying the challenge was “a collective one now.”

“We all share the same objective: to ensure a stable Europe and currency,” Merkel added.