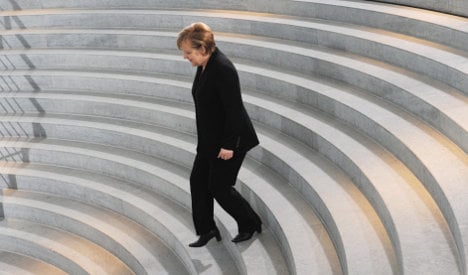 “I will do everything I can to ensure the euro stays strong and we will be successful in cooperation with our partners in Europe,” she said.

Asked whether the European Union could head off even deeper turmoil in the eurozone, Merkel told the mass-selling daily Bild newspaper: “It would help if

all 27 EU member states stood up for it together.

“At the EU summit, we will determine which strict rules we will implement to face future crises. In this way we will show: none of us doubts the euro. Speculators have no chance.”

She said that the euro had proved its strength in the crisis and would continue to be a stable currency.

EU leaders hold a two-day summit – their seventh and last of the year – amid persistent concerns that Portugal and even wealthier Spain could tumble into the debt crisis which has rocked the euro and driven Greece and Ireland into rescues.

Polish Prime Minister Donald Tusk, whose country will assume the EU presidency in the second half of 2011, urged leaders to rediscover their sense of solidarity, in an interview with another German newspaper.

“We have noticed recently in the EU that the sense of common purpose has weakened,” Tusk told the daily Die Welt, criticising a growing division between the 16 eurozone countries and the rest of the EU.

“It reminds us of the unfortunate plans for a two-speed Europe… as if we wanted to shut out part of the community.”

Amid charges of “arrogance” against eurozone heavyweights such as Germany, Tusk defended Merkel’s handling of the crisis.

“I believe Chancellor Merkel is one of the few politicians in Europe who understands very well how important balance or even synergy among these interests is,” he said, referring to the interests of member states.

Merkel came under fire earlier this year for appearing to prevaricate over helping out debt-stricken Greece and has been attacked for dismissing out of hand a proposal from Luxembourg and Italy to issue common European bonds.

He told the German business daily Handelsblatt that he never doubted Merkel’s commitment to Europe but said domestic political factors were clearly playing a role.

“There is an understandable new German trepidation when it comes to solutions to the problems one feels cannot be explained to the public in a short period of time,” he said, noting that all EU leaders shared such concerns.