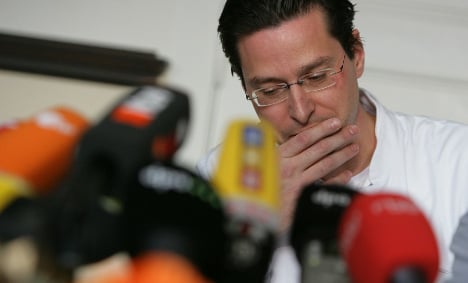 Though the highly risky technique used on the man known as the “Berlin Patient” would not work for most of the 33 million people with HIV worldwide, scientists say the research shows important progress toward a universal cure.

“Our results strongly suggest that cure of HIV has been achieved in this patient,” said the study released Wednesday in the peer-reviewed journal Blood, a publication of the American Society of Hematology.

The process began in 2006 when a US man in his 40s, who had been HIV positive for more than a decade, sought treatment for acute myeloid leukaemia, a lethal blood cancer.

After a first round of chemotherapy failed, his German doctor, Gero Hütter, thought he would see if he could perform a bone marrow transplant using a donor with a rare genetic mutation that is naturally resistant to HIV.

About one in 100 Caucasian people, or one percent of the population, have the mutation, known as Delta 32, inherited from both parents which prevents the protein CCR5 from appearing on the cell surface.

Since HIV enters the cell through CCR5 molecules, when they are absent HIV cannot penetrate.

The process was not easy, but after rejecting dozens of potential donors Hütter finally found a match and performed the bone marrow transplant using stem cells from the HIV-resistant donor in February 2007.

Hütter’s first study, published in the New England Journal of Medicine in 2009, showed no sign that HIV had re-emerged even though the patient had ceased anti-retroviral therapy to suppress HIV.

The latest findings show that the patient, 44-year-old Timothy Ray Brown, continues to show no trace of either the AIDS-causing virus or leukaemia.

But because Brown’s ordeal left him temporarily unable to walk or talk and statistics showing around 30 percent of patients do not survive bone marrow transplants, AIDS experts sounded a note of caution.

“I think we need a lot more research to try to replicate this without putting a patient’s life in danger,” said Karen Tashima, director of the HIV Clinical Trials Program at The Miriam Hospital in Rhode Island.

“Since we have good anti-retroviral therapy that can control the virus, it would be unethical to give somebody such an extreme treatment.”

Lead study author Kristina Allers acknowledged that the process would not work for most people.

“Nevertheless, as the study tells us that (an) HIV cure is in principle possible, it gives new hope for scientists in HIV cure research,” Allers said. “So the next challenge is to translate our findings into a strategy that can be applied without being life-threatening.”

Indeed, US researchers are already working on ways to replicate the same process in the cells without going the same risky route.

“I am very excited about it,” said David Baltimore, a co-recipient of the Nobel Prize in Medicine in 1975.

Baltimore is the founder of a biotech company that is working on developing his own stem-cell HIV/AIDS therapy that works functionally the same as the German team’s, and is in the process of organizing clinical trials, he said.

“What we are trying to do is treat a patient’s own cells so there is no immunological problem,” he said. “The fact that the one patient who was treated then was effectively cured is I think a very strong argument that you want to continue this kind of approach to the HIV problem.”

Jay Levy, an AIDS and cancer researcher at the University of California, San Francisco, described the latest research as evidence of a “functional cure.”

“I mean, one person is not sufficient. It is an encouraging first step but you really need to show it again,” he said. “I always look on this as a direction for future approaches, recognize what the problems are and then see if we can do better, and I have faith in my scientific colleagues to come up with something better.”

Levy and his team are also looking at ways to manipulate a patient’s own stem cells so that they do not express the receptors that allow HIV infection, much like the CCR5 mutation.

“Three years is not enough… We will know that in 10 years,” said Levy regarding the study’s assertion that a cure has been found. “It is too early to say you’ve cured, but my Lord, they have done a nice job.”