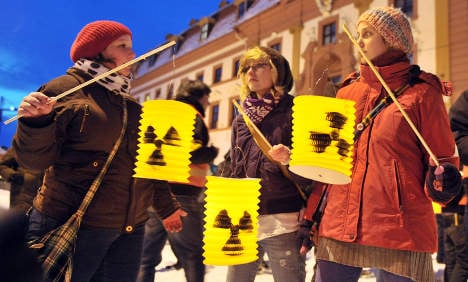 The so-called Castor transport left Cadarache, France on Tuesday evening carrying 2,500 nuclear fuel rods from an atomic research centre in Karlsruhe and German nuclear cargo ship “Otto Hahn.” The nuclear waste is headed for a transfer station near Lubmin in the state of Mecklenburg-Western Pomerania, though its exact two-day route is confidential.

Some 3,000 state police officers will protect the train along its route, among them 1,200 from Mecklenburg-Western Pomerania, state Interior Minister Lorenz Caffier said on Tuesday.

Meanwhile a “four-digit number” of federal officers would also be on hand to handle protests, Federal Police president Joachim Franklin said. The numbers are well below the 20,000 police who worked to clear tracks during the transport to Gorleben last month, when massive protests held up the delivery of Castor nuclear waste containers for days.

But this time, winter weather conditions could cause delays to the transport, Caffier said.

“It’s about putting safety ahead of speed,” he said. “That’s why there’s no set schedule.”

With some 70 gatherings planned along the route, protests are not expected to compare in scale to those during the last delivery, but Caffier still appealed to nuclear protestors to keep their message “violence free.”

But the snowy weather may work in the authorities’ favour. According to federal police, unknown perpetrators near Greifswald were stymied by the cold in their attempts to remove train tracks at nine different locations.

“The beams were not removed,” Federal Police president Franklin said. “We suspect this was a test to find out if the stones can be removed when it’s below freezing.”

But hardy anti-nuclear activists seem prepared to weather the cold. As the train embarked on its journey in France a group unfurled a three-metre wide banner that read, “Atomic energy is killing our future.”

Members of environmentalist group Greenpeace announced their intention to accompany the train for the length of the trip.

The concentration of radioactive fluid collecting in one of the storage chambers of the former salt mine has doubled in the last year, up from four to eight litres per day, said Werner Nording, spokesperson for the Federal Office for Radiation Protection (BfS).

Experts believe that the liquid is flowing from other mine chambers storing waste that may have become wet over the years, possibly compromising containers.

The announcement came several weeks after Wolfenbüttel district authorities revealed the number of cancer cases in the area surrounding the Asse dump had risen.

Men in the area have twice the rate of leukaemia cases as the rest of Germany. Among women, there was a tripling of the rate of thyroid cancer between 2002 and 2009.

The BfS responded with a statement saying that according to the “current scientific and technical readings,” there was no evidence of a connection between emissions from the operations at Asse and illnesses in the population.

The Asse dump near the town of Wolfenbüttel is used to store weak and medium-level radioactive waste from medicine as well as atomic power plants. Since 1978, some 126,000 barrels of the waste have been stored there.

Owing to a danger that the mine in which the barrels are stored could collapse or be flooded, the BfS is planning to eventually remove the waste.