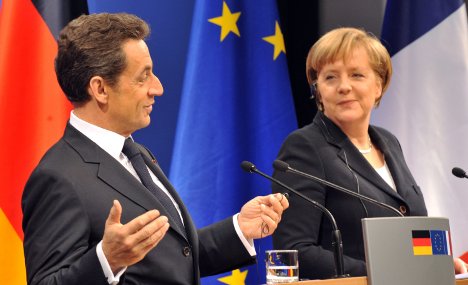 Merkel said that some in the 16-nation eurozone faced an uphill task in repairing their public finances but she expressed confidence that the single currency would survive.

“We should keep reminding ourselves what would have happened during the turbulence of the financial crisis if we had all had our own currencies.”

Ireland last month became the second eurozone member after Greece to seek a bailout, tapping a €750-billion ($1-trillion) temporary mechanism set up by the EU and the International Monetary Fund.

There are fears that rising borrowing costs might force other countries in the eurozone, most notably Portugal and Spain, to follow suit, leading to fears in some quarters that the single currency might fall apart.

Merkel wants EU leaders this week to agree on setting up a new, permanent crisis mechanism for after 2013 that would include private investors in the costs of any future bailouts.

The German leader also wants the EU’s governing treaty to be tweaked so that the crisis mechanism can operate without incurring objections from the country’s constitutional court.

Berlin additionally wants Brussels to be able to keep a closer eye on member states’ budgets, a sine qua non for taking on greater responsibility for their finances.

Germany and France however reject a proposal from Luxembourg and Italy for joint eurozone bonds, something which would help weaker eurozone countries borrow money more cheaply – but push up the cost for Berlin and Paris.

Earlier on Wednesday, Luxembourg’s foreign minister warned Germany and France not to act with “pride and arrogance” at an EU summit likely to focus on the eurozone crisis later this week.

In an interview with daily Die Welt Jean Asselborn said solutions must be agreed upon by all 27 member states and not dictated by just two leaders.

“I can only warn Germany and France from a claim to power that expresses a certain pride and arrogance, which disregard the fundamental European principle of solidarity,” he said.

“In my opinion there were scenes this year in which France and Germany created a problem ahead of an EU summit, then came to Brussels and dramatically said, ‘We have solved the problem and fixed Europe,’” he told the paper.

Clear decisions that calm financial markets and lay out future rescue mechanisms must be reached during the summit on Thursday and Friday, Asselborn said.

The attack on Germany and France is likely connected to the two countries’ refusal to support euro bonds.

But Asselborn said he was “fairly certain” that euro bonds would be introduced in the future to help struggling EU members get credit, and would be an attractive investment for Asian and American investors.