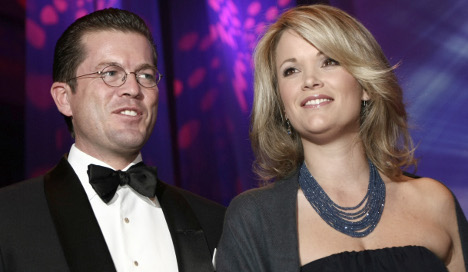 Politicians in Germany aren’t allowed to be attractive or enjoy their jobs. The public immediately becomes suspicious of anyone daring to break either of these rules. Those who do are quickly written off as showboating lightweights mostly interested in promoting themselves.

It’s in this context that Defence Minister Karl-Theodor zu Guttenberg travelled this week to Afghanistan to visit German troops ahead of the holidays – but he wasn’t alone. The aristocratic minister was accompanied by his fetching wife Stephanie, two state premiers, and the TV talk show host Johannes B. Kerner.

The Bundeswehr base at Mazar-i-Sharif became the backdrop for Kerner’s show, which had one prominent guest: Karl-Theodor zu Guttenberg. A few soldiers were used for garnish.

Is the war trivialised by such visits? Is there room for glamour and entertainment where death and killing is so prevalent? Did Guttenberg exhibit once more his political genius, or did he finally overstep the line separating tact, dignity and humility from obscenity? The only thing for certain is that opinions of “KT” – as his friends call him – tend to diverge greatly. The blueblood baron would probably say this division merely separates great minds from small ones.

The small minds are those focused on the recently released 109-page Foreign Ministry progress report on Afghanistan. They are scurrying from one foreign policy committee meeting to the next, ahead of the government’s parliamentary declaration this week on Germany’s military deployment in the strife-torn country.

The great minds are similarly focused on the nuts and bolts of German foreign policy – yet they are also doing a bit more. They are looking for ways to express an extra portion of solidarity with the troops and aren’t afraid to use kitschy or sentimental methods. The Guttenbergs said their joint visit to Afghanistan was “a matter of the heart,” which is why they had no qualms about bringing along Kerner to document just how big their hearts are.

The Germans are unfamiliar with such performances, at least from their own politicians.

Jacqueline Kennedy was considered the best-dressed woman in the world while she stood by JFK’s side. Carla Bruni frequently steals the show on official trips abroad with her husband, French President Nicolas Sarkozy. First Lady Michelle Obama and US President Barack Obama don’t hesitate to make public appearances as a couple both at home and abroad. Only in Germany must politics seemingly be as straight-laced and serious as possible.

And let’s be honest – if Guttenberg’s predecessor at the Defence Ministry, Franz Josef Jung, had asked his dowdy wife Beate to come along to Afghanistan with some homemade cookies for the troops, not a soul would have got upset.

At the end of a year in which several capable politicians in Germany have stepped down, we should be happy to have someone like Guttenberg. He’s stuck to his principles whether the issue was bailing out carmaker Opel or reforming his own ministry. Guttenberg has fearlessly stared down both friend and foe alike on issues such as ending military conscription. At the same time, he’s brought a fresh approach to politics – which can both impress and annoy people. But the more he seems to annoy, the more people appear to be impressed by him.

Reason dictates that such a calculation can’t go on forever. Our brutally fickle times demand hero-worship be followed by a precipitous fall. The public instinctively wants to tear people down to its own size – especially those with an aura of aristocracy about them.

The Guttenbergs are aware of this and yet don’t seem to care. Politicians aren’t supposed to be attractive or enjoy what they do for living? If these rules no longer hold true in Germany, then it was the Guttenbergs who first repudiated them.